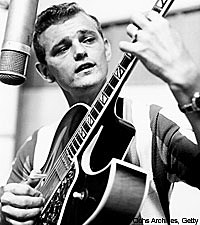 Singer, songwriter, guitarist and actor Jerry Reed died in a Nashville hospice on Monday after battling emphysema. He was 71.

Born Jerry Reed Hubbard in Atlanta in 1937, Reed earned the nickname The Guitar Man after his 1967 hit single, which was covered later by Elvis Presley (with Reed playing guitar on Elvis' version). As a session player, Reed's guitar work was also heard on hits by Bobby Bare and Waylon Jennings, among others.

As a songwriter, his compositions were recorded by Elvis, Johnny Cash, Porter Wagoner and Brenda Lee, just to name a few. In 2005, Reed was inducted into the Nashville Songwriters Hall of Fame. In 1970, he scored a pop-country crossover smash with 'Amos Moses.' One year later, he released the Grammy-winning 'When You're Hot, You're Hot.'

In the early 1980s, Reed topped the country charts again with 'She Got the Goldmine (I Got the Shaft)' and followed it up with the No. 2 hit, 'The Bird.'

Reed would also prove successful as a comedic actor in films such as 'Smokey and the Bandit,' and Adam Sandler's 1998 blockbuster, 'The Waterboy.' His TV appearances included acting roles on the comedy series' 'Alice' and 'Mama's Family,' and a brief shot at his own music-variety series in 1976. And although many would say the gregarious Reed was already animated, in 1972 he actually was animated for an appearance in the Saturday morning cartoon series, 'The New Scooby-Doo Movies.'

"Every dream I ever dreamed came true in my life," Reed told CMT in 2005. "I got to write hit songs... And I got to be on phonograph records ... I'm a cotton mill boy, and I got to go to Hollywood. Can you imagine that? Why, yeah, my goodness gracious. Go figure."