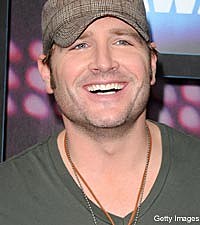 Jerrod Niemann wanted to pay homage to Robert Earl Keen on his new album, so he included the Texas troubadour's 'That Buckin' Song', on 'Judge Jerrod and the Hung Jury.' He has performed it in concert for several years, and the title even made it into a song he wrote with Garth Brooks.

"The first time I heard it was in Dallas, Texas, on the radio, and I thought, 'Wow! This is on the radio? Go Texas!' [laughs] I loved it, so I learned it," Jerrod tells The Boot. "When I first moved to Nashville and sat down to write with Garth Brooks for the very first time, he said, 'I like to put things in songs. Everybody thinks the public isn't intelligent or something. Everybody has a BS radar. They don't even know they have it or not. It's either it's real or it's not, because they're living in the real world. So, everybody doesn't have to relate to every single song. Sometimes they like to hear about the artist. 'Where did you come from? You're singing about yourself' ...'"

"But in regards to 'The Buckin' Song,'" Jerrod continues, "when Garth was talking about stuff he likes to put in songs, he mentioned latigo being in 'Rodeo.' It's a type of leather [used on saddles], the people would go find out what that meant. And I told him, 'There is a song I know called 'The Buckin' Song,' and I play it every time I can. I think it's hilarious.' I played it for him, and I said, 'I think that would be cool for everybody to wonder what that is and go look for it.' So, we put it in 'That Girl Is a Cowboy,' when it says 'Robert Earl singing out 'The Buckin' Song' and with every word Keen was bringing, she was singing along.' So, it was so bizarre that the very first song I had a chance to write with Garth Brooks, that being included and for that to be on our album years later, that is pretty cool."

Jerrod hopes that putting the song on the album translates into him being a bit more popular with the ladies. "If you listen to the album, there is a group of eight really hot girls requesting Robert Earl Keen on our album, just showing Robert Earl Keen and his fans that I'm not trying to steal their music, but to celebrate it. And maybe some day I'll hear eight hot chicks say my name in unison. But as of now, I can't even get one. [laughs]"

Some of the words in the song are possibly a little offensive to some people, and Robert Earl actually found himself apologizing for the song at one point. "This guy wrote me a letter that said he'd been a fan for a long time, and he put in the record when his 7-year-old son was there," Robert explains to The Boot. "He couldn't believe that I'd put that on there. And I know it's a lame, immature joke, but it was fun at the time! We were just messing around, getting Lyle [Lovett] to come sing on it. But all of a sudden, this guy was freaking out with his kid. So I wrote him a letter saying that I was sorry and thanking him for reminding me that I have a responsibility. That doesn't mean I won't keep getting off-beat about stuff, but I've said my share of apologies."

Jerrod, who is racing up the charts with his single 'Lover, Lover,' will most likely perform 'The Buckin' Song' when he hits the stage in St. Louis Park, Minn., on Wednesday, July 21.