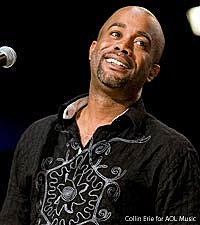 Darius Rucker has already proven he isn't limited by musical stereotypes. With a successful rock career as lead singer of Hootie and the Blowfish, as well as becoming a platinum-selling, award-winning country artist, Darius is now being embraced by fans of an entirely different style of music: jazz.

Recently announced as a performer at the New Orleans Jazz and Heritage Festival, he joins an eclectic list of performers that includes B.B. King, Van Morrison, Widespread Panic, Lionel Richie, Aretha Franklin, Shawn Colvin, Elvis Costello and several others. The festival will be held April 23-25 and April 30-May 2 in the Crescent City.

Meanwhile, Darius is putting the finishing touches on his sophomore CD, which will include a duet with Brad Paisley. He's also getting ready to continue as opening act on the next leg of the Rascal Flatts American Living Unstoppable tour, which kicks off Jan. 15.