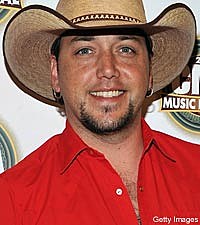 Jason Aldean promises some unexpected twists on his next album, but don't expect him to switch to a hip-hop career anytime in the near future.

Although he stops short of completely denying that there's rap material on his next album, which he says will be released in November, he does say such reports are at least exaggerated.

"I don't know why all these nasty rumors about rap songs keep coming up," he tells The Boot with a note of amusement in his voice. "It's not a rap song ... I never say never but I will say that I'm a country singer. I am definitely not a rapper. So if I was to do anything like that, it's not going to be Kanye West-style or anything."

So just what will the new album offer? "It'll be aggressive and loud and is going to have some surprises," he says.

You'll likely have a chance to check out Jason's new sound during his upcoming shows. Just back from a family vacation to Florida, Jason says he and his band are planning which of the new songs to road test when they go back on the road July 16.