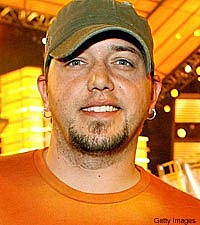 Jason Aldean's 'Big Green Tractor' was parked at the top of the charts for four straight weeks, also marking the singer's first appearance on the Billboard Hot 100 chart. But he admits he isn't the only one who deserves credit for his third No. 1 hit.

"We found the right song," Jason told The Boot at a party in Nashville celebrating 'Tractor.' "We've been fortunate enough to have two really big songs, probably the two biggest songs of the year. It kind of took everything to the next level."

With a No. 1 album and seven Top Ten singles over the past few years, Jason certainly has momentum. "I'm not planning on reinventing the wheel by any means," he explains. "I don't want to make the same record, but I don't want to completely abandon what's worked for us either. I'm looking for some cool songs and taking what we've been doing to the next level."

Jason admits to having to pinch himself sometimes. "I don't think you can plan on stuff like this," he says of his success. "Did I envision it being this way? No. Did I hope it would happen this way? Yeah. Absolutely."