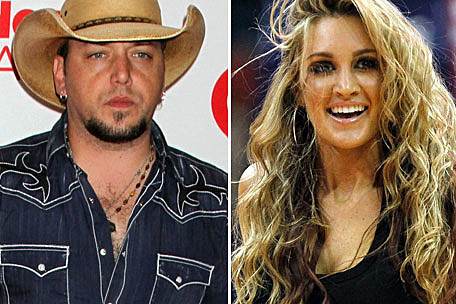 Jason Aldean has admitted he "acted inappropriately" after pictures posted by gossip site TMZ showed the country superstar getting close with former "American Idol" contestant Brittany Kerr at a Los Angeles nightclub last week. The married father of two is owning up to his mistake and apologizing for his indiscretion.

"Hey Guys -- I wanted to talk to you directly, so you were hearing the truth from me and not just reading allegations made about my personal life on gossip web sites," Jason posted on his Facebook page Sunday night (Sept. 30). "The truth is that I screwed up. I had too much to drink, let the party get out of hand and acted inappropriately at a bar. I left alone, caught the bus to our next show and that's the end of the story. I ultimately ended up embarrassing my family and myself. I'm not perfect, and I'm sorry for disappointing you guys. I really appreciate being able to work through this privately with my family and for all your continued support." 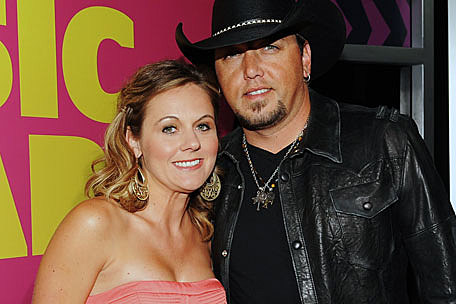 Jason acknowledges that being on the road, and away from his family, is difficult for everyone, but says his wife, Jessica (whom he wed in 2001), makes his job much easier. "She handles all the stuff I don't want to handle," he tells The Boot. "I'm the guy who wants to play my music and meet my fans. She picks up the phone and makes the business call. When it comes to the music, she'll give me her opinion if I ask her but that's about it. It works out pretty good."

It's perhaps too early to tell what effect, if any, the revelations will have on the Oct. 16 release of Jason's highly-anticipated album, Night Train, but the first single from the disc, "Take a Little Ride," is already sitting at the top of the charts. Jason is also nominated for three CMA awards, including Entertainer of the Year, and joins Dierks Bentley, Kelly Clarkson and Little Big Town among the first round of performers announced for the live broadcast.

The 46th Annual CMA Awards, hosted by Brad Paisley and Carrie Underwood, will air live from Nashville, Nov. 1 at 8:00 PM ET on ABC.