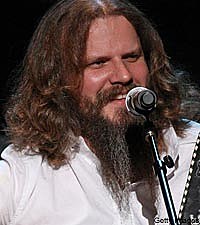 Joe's Pub in New York City has been a longtime supporter of the Nashville music scene. The famed Lower Manhattan venue, which has played host to dozens of hit songwriters as part of their CMA Songwriter Series, recently announced that CMA Award winner Jamey Johnson will appear at the venue on September 8.

Jamey, whose songwriting credits include Trace Adkins 'Honky Tonk Badonkadonk' and George Strait's 'Give It Away,' also penned his own Top 10 hit, 'In Color.' He will be joined on stage by his 'Give It Away' co-writer Buddy Cannon, Bobby Pinson, who counts Sugarland, Toby Keith and Brooks & Dunn among his credits, and Bob DiPiero, whose songs have been recorded by dozens of artists, including Tim McGraw, Reba McEntire, Faith Hill, Montgomery Gentry and John Anderson. Bob will also appear at Joe's Pub this Thursday (July 15), along with James Otto, Chris Wallin, who has penned tunes for Kenny Chesney and Keith Anderson, and Robert Ellis Orrall, whose credits include Taylor Swift and Martina McBride.

Joe's Pub boasts a long list of country songwriters and artists who have previously graced their stage, including Emmylou Harris, Marty Stuart and Dolly Parton.