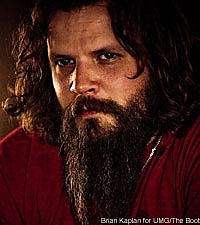 Jamey Johnson is being hailed as country music's new savior, with his cut-to-the-chase lyrics and those soulful, traditional country vocals. His critically acclaimed, multi-award-winning 2008 album, 'That Lonesome Song,' left fans thirsty for more ... And Jamey is now putting the finishing touches on the perfect thirst quencher, 'Guitar Song I & II,' which will release later this year.

"I don't even know how best to describe this album," Jamey admits to The Boot. "When I started off, it was just songs I'd recorded, one for 'That Lonesome Song,' and some other ones I had intended being on different records."

The singer hastens to add, "I think we're making the best record by combining all these different sessions. There's songs that work together that tell the best story from a certain period of time. Then there are songs that don't work as well together if taken out of context. What we've done is put the songs together in a way that I think people would want to hear connected."

One of the album's many standout songs, 'My Way to You,' is an introspective look from a man who has taken many twists and turns in finding his way on his intended route. "It's about which way he went, and the repercussion from the next decision, until he gets darker and bleaker and is totally lost," Jamey explains. "He starts putting two and two together on the way out and comes to the conclusion that everything is for the purpose of God and it's all wrapped in the design of the yin and yang. That's what it is all about -- you live your life for the purpose of God, that's the conclusion of it all. Yeah, you're gonna make a bad decision somewhere and they're gonna come back and haunt you. That's OK, that's part of life, too. That's the message of this album."

Jamey recorded enough songs for a double album, but he says at first he was not sure this would be the right time to release such an undertaking. "Luke Lewis [head of his record label, Universal Music Group] and I talked about that. First there was the economy, and then I didn't 't know if people would be interested enough to buy two albums to get the whole message."

Like any great songwriter, each time he writes a song, Jamey faces the dilemma of coming from the heart or being sure he pens a tune that radio will play. "Before I moved to town I wrote a song when I felt like writing a song, and I treasured every one of them. When I first got to town I didn't tell anyone I wrote; I didn't want to share that stuff with anybody. I didn't want to go out and play those personal songs in a bar. I'd go out and sing covers. I'd play everyone else's music, but not my own.

"When I started working with publishing companies, I discovered you write for a different reason. You write because it's 10:30 on Thursday and you're supposed to be writing right now. While that hones the craft, that does not test the soul. I think a better way of writing is from that artistic approach of going back to the way you did it naturally before, writing when it hits you to write, when something inspires you. If you do that you'll find you can't write enough and you can't run out of ideas. If you pay attention there's always something nearby, someone's got a story they want told, somebody's got a piece of information they need to get out. It might be their own story or their family story, so write it. If they could write it and get it on the radio, buddy, they would holler and they'd tell everybody."

Jamey is finding new inspiration these days as he travels from show to show, seeing new scenery and meeting new fans. "That's what inspires me right now, hearing so many different stories the people I see. Everybody's got one and they're all different and they're all fascinating or God wouldn't have planned them that way."

Jamey also draws inspirations from a few of his heroes, Hank Williams, Waylon Jennings, Johnny Cash, John Conlee and Alabama. Interestingly enough, he has come to know the sons of two of those heroes. He just came off a tour with Hank Williams Jr. and he's good friends with Shooter Jennings.

"Hank Jr. is a fascinating figure for country music. I think he's one of the nicest guys you'll ever get to know, if you get to know him. He's always full of conversation, interesting ideas, and he's always got 25 things going on. He's constantly keeping on top of his game. He's the kind of man a young man in this business should aspire to be. He's gifted, there's just no better way to describe it. He's a gifted songwriter, entertainer and singer, and you don't find all that in one guy. So God bred a honky-tonk singer, and it was through Hank Sr. to Hank Jr."

Although Jamey never got to meet Waylon, he and Shooter have formed a friendship that remains strong. "I went to Waylon's memorial, right after he died, and I saw Shooter perform that night at the Ryman. He came out with his band and they just did straight rock 'n' roll versions of Waylon's songs. I thought, 'How cool is that, that's how you pay tribute to your dad.' I knew it was important to him that he wanted to come out and play those songs that way. That was when I started paying attention to Shooter.

"Later on, I had a mutual friend who took me out to Shooter's house in Los Angeles, and we've been friends ever since. I'm always excited to see what he comes out with next. Some of his stuff is out there, you have to settle into it, and start listening to the message behind it, and then you'll find it. That's what I respect about any musician, if they make me listen to it more than twice. Make it interesting enough for me to have to dive into it and can't wait to hear it again, or can't wait to share it with somebody."

Jamey is certainly enticing fans to want to hear more songs from his new album with the release of 'My Way to You, a song he's playing every night on the Country Throwdown tour, which kicked off this past weekend in Tampa and West Palm Beach, Fla. The singer/songwriter is also scheduled to play the Bonnaroo Music and Arts Festival, June 10-13 in Manchester, Tenn.

"I can't speak for anything about Bonnaroo; I've never been," Jamey explains. "I have heard about it, I've heard about all artists they have at it, and based on what I've heard, there's no one way I could describe it. It sounds to me like a festival where they mix everything up in one long concert week and throw down. It sounds like a great party to me."

Jamey and the entire Throwdown gang will be in Cleveland, Ohio, on May 20 and Cincinnati on May 21. The following night finds them at Tinley Park, Ill., then it's on to Noblesville, Ind. for a full four days of music and fun.