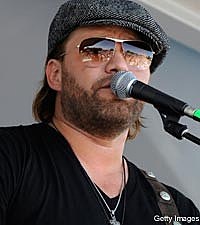 James Otto took to Twitter this week to protest illegal downloading of music, offering a specific example of how it affects artists and songwriters.

"I've known music piracy was rampant, but check it out," he wrote. "This week I sold 7,500 singles (which is pretty good), but 80,000 people stole it. No wonder so many of my friends in the business are losing their jobs. Kinda scary. Half the [song]writers in Nashville can't get a job anymore because of this. People pay five bucks for a cup of coffee, but not 99 cents for a song?"

And while James then quickly Tweeted, "Sorry, rant over," a few hours later he was back on topic.

"I worry sometimes that a sense of entitlement is creeping into our society," he continued. "Entitlement is the killer of creation. Why work if everything [is] free? This country was built on hard work by people expecting to be paid!

"I wanna say thank all y'all who love and support music," he added. "It's the first thing they cut from school budgets, and now nobody wants to pay for it."

James' current single is 'Groovy Little Summer Song.' It's from his new, self-titled album, due for release in September.


A Day in the Life of James Otto

Filed Under: JamesOtto
Categories: Country News
Comments
Leave A Comment
Back To Top