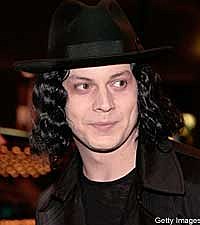 Jack White is experiencing all sides of the music business. Frontman of the White Stripes and the Raconteurs, as well as an award-winning producer for Loretta Lynn, the Nashville-based singer has also opened his own record label, Third Man Records. The busy entrepreneur says he launched the label as a direct response to the ongoing downward spiral of the music industry.

"It's a positive way of looking at a negative situation," Jack tells NPR. "People aren't buying records like they used to, so it's nice to try to figure out a way to make them do it. I would enjoy the same thing to own an old movie house, to try to trick people to come in -- like having a 3-D or Smell-o-Vision or VibraVision or something. McGuffins to get people interested."

Jack's innovative techniques include putting music out the old-fashioned way -- on vinyl 45's. The dated approach, he explains, is not as unique as people might think. "Vinyl is the real deal," he insists. "I've always felt like, until you buy the vinyl record, you don't really own the album. And it's not just me or a little pet thing or some kind of retro, romantic thing from the past. It is still alive. United Pressing Plant is two or three blocks away from here, and they're pressing up millions of copies of vinyl every year. And people are still buying them in droves."

Working with rockabilly legend Wanda Jackson opened his eyes, he says, to why newer, technologically-savvy methods aren't necessarily better. "The more we try to work on this and perfect it, the worse it gets," he explains. "And that's what happens nowadays with people working on computers. They can so easily fix things with their mouse and take out all the, 'Oh, somebody coughed in the background; we need to take that out' -- or somebody hit a bad note. Those are all the best moments, and that's where music has taken a left turn and they need to get back on the road."

Third Man Record's roster includes The Raconteurs, Transit and Dan Sartain, as well as the White Stripes. Jack launched the label back in 2001 but just opened its Nashville offices in March of this year.