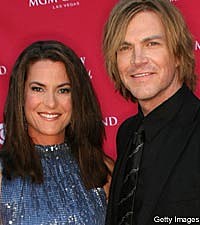 Jack Ingram has a passion for music, whether he's making it or just listening to it. "When I start talking about [music], I feel a weight on my chest and a pressure that has to get out, and I don't know where that comes from," Jack tells The Boot. "I've always had that thing where I want to get it out."

Yet, Jack and his wife Amy sometimes "butt heads," he confesses, because he can get completely consumed by the music's most minute details that he sometimes forgets his responsibilities as a husband.

"She likes music, but she's very mainstream," explains the singer-songwriter. "She doesn't buy a whole lot of music in general, and likes listening to the radio, [but] doesn't dig into songwriters, doesn't care who wrote the song. If she likes it, she likes it, if she doesn't, she doesn't. It's not a huge part of her life."

Jack says he grateful to have someone who is such a huge part of his life who acts as a sort of a buoy. "It's great for me, really ... I could just dive in and never come back up!" He concedes Amy is there to remind him, "Hey, it's not all about that. What about your kids, you know? What about that dirty diaper? Trash that hasn't been taken out yet? C'mon, get up! Enough about all your little music stuff.'"

That said, Amy does enjoy the benefits of being married to a singer-songwriter. After they started dating, Jack wrote his wife a song, one which had a very positive effect on their relationship. "I got lucky early on, so she liked it at least a little bit."

Jack is currently climbing the country charts with his single, 'Seeing Stars' (which, by the way, is not about what happens to him if he doesn't take out the trash!)