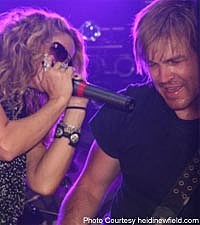 Jack Ingram's good-natured antics on the Country Throwdown tour have upped the fun quotient for everyone on the trek. Just ask Heidi Newfield. She was curled up in her bus chatting with friends when the driver started to pull out of a venue's parking lot.

"The convoy was just about to go down the road and Jack's bus stopped right in front of mine, blocking it," Heidi tells The Boot. "Then he and and Bobby [McKenzie, a Nashville songwriter] came over to my bus and said, 'Get your pillow, get your duffel bag, and get your butt over here. We're having a dance party.'"

When Heidi protested saying she would stay on her bus with "my dog and my peeps, they said 'Get your pillow. Get your duffel bag and get over here. We're having a dance party!' I went and got my pillow and my duffel bag and I'm so glad I did. We stayed up all night and danced and we had the best time. You haven't lived until you two-stepped while [the bus is] going down the road and around curves."

Fans aren't left out of the fun either. On a recent stop, some were so preoccupied playing games while tailgating, they almost missed chatting with Jack and some other performers.

The fun started when Jack, Heather Morgan and others climbed into a golf cart and drove to the fans' parking lot at one venue. After trying to strike up a conversation with a few fans, Jack finally asked if they were "going to see the show by that Jack Ingram guy." One fan finally looked up. "That's when she took a close look and started to realize who he was," Heather tells The Boot.

Jack then told the fan, "That's great. I'm Jack Ingram," before driving off with a wave to the squealing group.