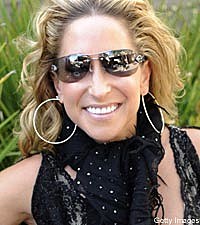 Heidi Newfield will have plenty to remember from the Country Throwdown tour.

And she's not just talking about the dance parties, fan visits and other esprit de corps moments on the road, but also the song ideas that have come her way thanks to the kinship and brainstorming among performers and songwriters that was an integral part of the tour.

"My good friend Bob McKenzie (a Nashville singer-songwriter) has been with us and sometimes we'll sit down in the bus and just start writing," Heidi told The Boot backstage at a Throwdown tour stop in Virginia. "I probably have three albums worth of material now... Bobby says this is where the songs are, and he's right!"

It's also where the fans were, as evidenced by the thousands who flocked to the tour to hear Heidi, Jamey Johnson, Montgomery Gentry, Little Big Town, Jack Ingram, Eric Church, Buxton Hughes and several other country crooners. What surprised Heidi the most was the number of Country Throwdown fans who not only know the songs from her 2008 album, 'What Am I Waiting For,' but also from her upcoming album that will be released later this year.

The album, which Heidi is working on with multi-Grammy Award wining producer Blake Chancey (Dixie Chicks, Montgomery Gentry, Waylon Jennings) is about two-thirds complete and fan response to the new songs she played on the tour has made Heidi especially eager to release it.

"It's such a joy," Heidi gushed. "I get jacked up when the crowd is jacked up. I feed off of their energy -- and so does my band -- just as much as they feed off of mine. When we see them pumping their fists in the air and mouthing all the words -- even to brand new material -- it's incredible."

Two of the hot new songs Heidi debuted on the Country Throwdown tour are 'Born Too Late,' which she likens to a "Waylonesque traditional tune" that tells how the singer often feels she was born in the wrong era, and the power ballad, 'Why'd You Have To Be So Good?'

"I literally see people weeping in the crowd," Heidi said of fans' response to the ballad. "They never heard this song before, but you know you are affecting them with it ... When you are playing brand new material for an audience and you see them respond to it, you know when it's working and when it's not."

Heidi said that although The Country Throwdown tour was a new concept for country artists, they quickly developed bonds that she predicts will last for the remainder of their careers. "It has a very fresh, exciting vibe to it," she noted. "I think the camaraderie is what we will miss the most. We've built a lot of great relationships out here."