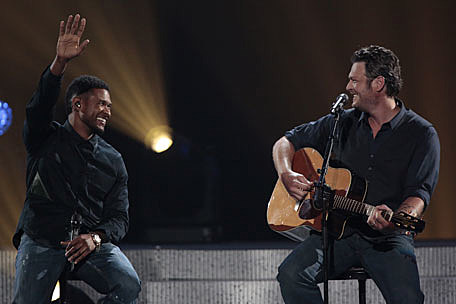 Miranda Lambert was hardly halfway through her hit song 'The House That Built Me' when she broke down Wednesday night (May 29) during her husband's 'Healing in the Heartland' telethon on NBC. But she wasn't the only one moved by the tribute to victims of the May 20 tornado in Moore, Okla.

Host Blake Shelton spent the most time on stage, and managed to keep it together during two performances and one touching interview with a recent high school graduate who lost her mother in the storm. Between the eight performances, clips of the storm and the damage it left behind were sprinkled between pre-recorded messages from Jay Leno, Carrie Underwood, Toby Keith, Jimmy Fallon and more.

Shelton began the night singing 'God Gave Me You.' The theme of the evening would be songs about family or home, with the exception being Luke Bryan's performance of his new single 'Crash My Party.' Darius Rucker performed 'True Believers.' Rascal Flatts sang 'I Won't Let Go.' Vince Gill delivered a poignant and beautiful rendition of 'Threaten Me With Heaven.'

Other performers came from Reba McEntire and R&B singer Usher, who closed the show with Shelton singing 'Home,' a track the country singer covered for radio in 2008. The music was the focus of the one-hour telecast, although scenes of the destruction caused by the storm reminded everyone in the sold-out audience or watching at home what the purpose was.

All money donated during and after the telethon benefits the United Way of Central Oklahoma May Tornadoes Relief Fund. An eBay auction featuring two dozen items from artists was also open during the show. Donations are still being accepted at the United Way website.