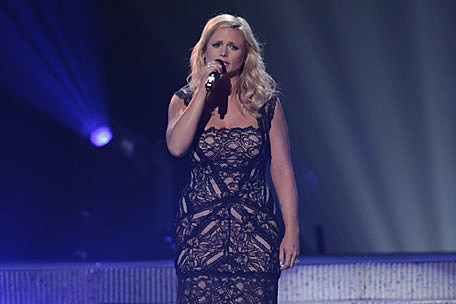 More than $6 million came pouring in during Blake Shelton's NBC concert telethon to raise money for victims of the May 20 tornado in Moore, Oklahoma. That figure is a combination of ticket sales and pledges for the one-hour televised event that featured performances from Shelton, Usher, Miranda Lambert and many other country superstars.

KJRH in Tulsa, Okla. revealed the figure on Friday morning. Wednesday's 'Healing in the Heartland' concert was broadcast live from the Chesapeake Energy Arena in Oklahoma City. Early reports were that nearly $3.7 million was raised before the show was aired on the west coast. All money went to the United Way of Central Oklahoma May Tornadoes Relief Fund.

Reba McEntire, Rascal Flatts, Vince Gill, Darius Rucker, Luke Bryan and One Direction's Ryan Tedder also performed. By far the most talked-about performance was Lambert's rendition of her hit song 'The House That Built Me.' The singer and wife to Shelton broke down midway through and turned the microphone to an audience that was more than willing to lend a hand.

Donations are still being accepted at the United Way webpage. Residents of Moore and surrounding areas had just 16 minutes to prepare for the twister. Twenty four were killed, many more were injured and hundreds of buildings -- including two elementary schools -- were destroyed.