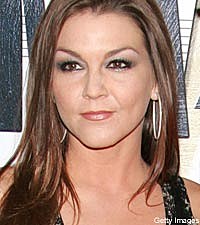 Gretchen Wilson's sharing news of a deluxe edition of her new CD, 'I Got Your Country Right Here,' right here at The Boot -- and at her official website.

Fans who order the boxed set will be treated to a variety of cool items, designed with die-hard Gretchen fans in mind. "We're gonna have a copy of the album, obviously, in there," Gretchen tells The Boot. "And some form of the Constitution in a poster kind of a thing; something you can pull out, unfold and read, because I think every American should."

Gretchen reveals the box will also contain a flag that looks exactly like the front cover the of album, "which is just a big eagle with the words 'I Got Your Country Right Here.' I think it's a really cool looking thing to hang up in the garage. There's no pictures of a girl on there or anything silly, like what most merchandising looks like. So, it's the kind of thing you can hang up on your garage wall, or you can actually fly it. Both sides are printed, so you can fly it if you want to."

The deluxe set will also contain a picture book, showcasing several previously-unpublished photos from Gretchen's collection. The whole package will "be in a really nice box that you can keep with the rest of your box collections," says the singer.

Gretchen is currently heading up the country charts with 'Work Hard, Play Harder,' from 'I Got Your Country Right Here,' which is due in stores March 30.