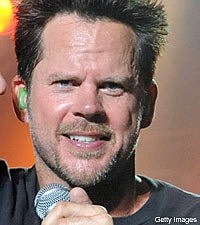 Gary Allan and his band members may have new guitars, but they're not happy about it. The singer and his crew lost all their equipment in the tornado that hit the Big Valley Jamboree in Alberta, Canada on Aug. 1.

"It's been really weird lately [because] everybody's got new stuff," says Gary. "We're replacing every guitar, and some we had since we were 10 or 11. Even our bus got totaled. We came out of Canada that weekend as just a bunch of dudes with dreams."

Gary says that thanks to friends such as LeAnn Rimes and Rascal Flatts, his band was loaned drum sets and other equipment, adding "It's amazing the things you don't think about, like cables and stuff. All of our equipment, including the bus, is in a warehouse in Nashville waiting to see what the insurance company is going to pay for it."

In the meantime, Gary and his band kick off the Get Off on the Pain Tour in Chicago on Oct. 14. Many of the dates will be at House of Blues clubs and the singer says he's stoked to get back to the more intimate setting.

"We've been doing arenas and theaters, and I love the intimacy of venues like the House of Blues. When everyone is packed in and so close to you, it makes you play differently," explains the singer-guitarist. "It's so much more fun to play because there's so much more high energy in a place like that."

And it's not surprising that Gary quickly points out touring is his favorite thing to do. "I make CDs so I can play," he states emphatically. "I've been doing this since I was 12. I loved being in front of people. I'd play the bars at night and thought sleep was what you did when you got to school the next morning!"

Jack Ingram, The Eli Young Band, Stoney LaRue and Justin Moore will alternate performances on the tour. Gary named the trek after the title of his new album, which he says he just turned in to his record label.

"I wore the thing out the last few days before I turned it in, just listening to it," the California native admits."I never feel like an album is ready to turn in, but you just have to go with it and give it to them. That's why I never listen to my old albums; it's frustrating because I hear stuff I could have done differently."

Gary promises fans will hear what they might expect from him on the new project but might also be surprised at a few of the tunes. "I'm very proud of this album. It's got a little bit of all my other albums in it, from 'Smoke Rings [in the Dark]' to 'Livin' Hard,' but it's also got some new stuff that I've never tried before. There's a song called 'Kiss Me When I'm Down' that really takes a left turn!"

'Get Off on the Pain' is expected to be released by the end of the year.

Filed Under: Gary Allan, GaryAllan
Categories: Country News
Comments
Leave A Comment
18 Years Ago: Gary Allan’s ‘Nothing on But the Radio’ Goes to No. 1
20 Hit Songs That Were Almost Sung By Other Artists
Gary Allan Splits From Longtime Record Label UMG Nashville
Top 10 Father’s Day Country Songs
20 Father-Daughter Dance Songs That Are Perfect for a Country Fan’s Wedding
10 Country Albums That Turned 20 in 2021
Gary Allan Gets Engaged to Girlfriend Molly Martin: ‘She Said Yes’
Where Were You on 9/11? Country Stars Remember
The 10 Sexiest Songs in Country Music