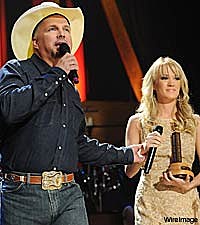 When Carrie Underwood was inducted as a member of the Grand Ole Opry last year -- the highest honor many feel can be bestowed upon a country artist -- fellow Oklahoman and Opry member Garth Brooks handled the induction duties.

"I felt old!" Garth tells The Boot, recalling what ran through his mind as he shared the stage with the then 25-year-old country sensation. "I felt huge. That girl's tiny! I was like, 'Suck it in!'"

On a much more serious note, Garth is hopeful that Carrie understands what an honor and responsibility being a member of the esteemed Opry means. "It is a marriage and it is a marriage that you try to uphold the best that you can," says the entertainer who became an Opry member in 1990. Garth adds that he thinks Carrie has an edge by virtue of coming from the Sooner state. "She's from Oklahoma, which, to me, is the land of common sense. I think she gets it. The coolest thing she said was 'I know I didn't come here by the conventional road.' That was very cool, so I think she'll love it and respect it enough."

Garth also reasons that the Opry should be honored to count Carrie among its ranks. "To have that kind of muscle at the Opry, I'm happy for them because that little gal can belt it out!," he says.