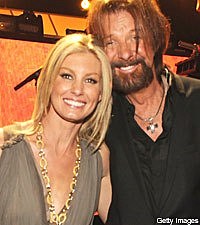 Brooks & Dunn were able to revisit some great memories, courtesy of their famous friends, during the recent taping of the 'ACM Presents: Brooks & Dunn – The Last Rodeo' TV tribute. And one of those friends, Faith Hill, revealed that the boys had a penchant for pranks early on, making her one of their unwitting victims!

Country Aircheck reports that during the taping in Las Vegas, Faith recalled horrifically finding a headless eel defrosting in her bed during a 1994 tour stop in Canada. But the fiesty young singer decided to get even with the dynamic duo by having them detained by immigration officials at the U.S. border and strip searched! Kix joked that he told the female officer during the humiliating experience, "Don't put that rubber glove on if you aren't going to use it!"

After relating the story to the audience, Faith had eel sushi delivered to the pair onstage. Kix reportedly ate his eel whole, but Ronnie couldn't stomach his reminder of Faith's act of revenge!

More juicy stories and some great music from Brooks & Dunn's epic 20-year journey, will be featured on the tribute show, airing May 23 on CBS.