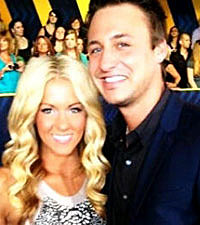 Congratulations to Love and Theft member Eric Gunderson and his wife, Emily, who welcomed their son, Camden William Gunderson, on Sunday, March 10! The baby was born prematurely, but thankfully is doing fine.

"He arrived earlier than his expected May due date and will be spending some time in the hospital, but mother, father and baby are all doing well," a rep from the duo's record label, Sony Music Nashville, writes in a statement. "Eric and Emily are moved by the tremendous outpouring of warm wishes from their fans, family and country radio, and look forward to sharing more updates soon."

The singer already has several plans for the new addition to his family. "I'm so excited to have a boy!" he told The Boot. "Emily would be happy either way, but I've been secretly planning father/son hunting and fishing trips all along. I might even let him try his hand at guitar, although, you know those musicians are a handful ..."

This is the first child for the couple, who wed in April 2010.

Now that Camden has made his appearance early, Eric will have time to get acquainted with his little boy, before he joins his bandmate, Stephen Barker Liles, in May, when they hit the road with Tim McGraw on his Two Lanes of Freedom tour.

The duo is scheduled to head to Australia for the CMC Rocks Festival on March 16 and 17, followed by stops in Missouri, Michigan and Ohio. Keep track of Love and Theft concert updates here.