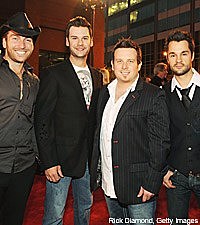 The Canadian Academy of Recording Arts and Sciences (CARAS) has announced nominees for the 2010 JUNO Awards show. Emerson Drive scored their third JUNO nomination when their name was called as one of the contenders in the Country Album of the Year category for their 2009 release, 'Believe.'

"We are pumped to be included in the JUNO nominations this year," says Emerson Drive lead vocalist Brad Mates. "We spent a lot of time writing and looking for songs for 'Believe' so it's a great feeling to be recognized by CARAS and their members for the album."