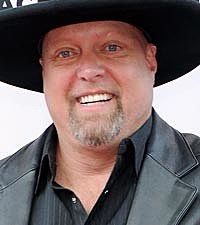 Montgomery Gentry's Eddie Montgomery, whose father died from prostate cancer at age 52, was fortunate to receive an early diagnosis for the same form of cancer. If it had not been for his son being in an accident in November, he may not have found out about his condition until much later.

"My son had a four-wheeler wreck and trashed his shoulder in three places, so he had to go to a bone specialist," Eddie tells Country Weekly. "I'd been trying to exercise, get back to losing weight again, and was there talking to the bone specialist telling him how I'd been hurting in my hip."

The doctor offered to X-ray Eddie's joint, and when he did, he made an alarming discovery. "He X-rayed it and pulled me to the side, away from my son and said, 'I don't know about your hip, but you need to go to a prostate doctor immediately, because I see a shadow there,'" the singer recalls.

He was pronounced cancer-free in January after undergoing successful robotic surgery in December.

The year is already shaping up to be a great one for Eddie, who's coming off a rough 2010. In September, Montgomery Gentry left their record label of 11 years, Sony Nashville. In November, he announced his cancer, and in early December, his wife asked for a divorce. But through it all, the singer has remained upbeat and positive. They have signed a new record deal with Average Joe's Entertainment and are expected to release their new single later this spring.

But first, the duo will hit the stage at the Operation Yellow Event at Nashville's Lipscomb University on March 29 along with Charlie Daniels, Wynonna and the Grascals. Lipscomb's Yellow Ribbon Program offers eligible post-9/11 GI Bill veterans and their family members an undergraduate degree tuition-free or a graduate degree tuition-free or at a greatly reduced tuition rate.