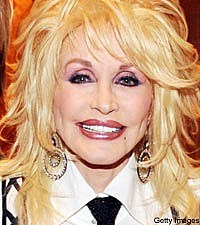 The always candid Dolly Parton has revealed that she's in favor of granting gays and lesbians the rights to marry.

"Sure, why can't they get married? They should suffer like the rest of us do," the outspoken superstar told CNN show host Joy Behar. When Behar suggested Dolly's Southern roots might not mesh with the idea of marriage equality, the singer agreed, "I know that's true."

Dolly's not alone. This year, Reba McEntire surprised some of her conservative fans when she spoke in support of her gay fans and "many gay friends." "Don't judge me and I won't judge you," she said. "Keep an open mind."

Sugarland's Jennifer Nettles, too, recently celebrated her gay fans. "I've always had a large gay following," the singer, who has performed at Gay Pride in Atlanta three times, said. "Particularly in the lesbian community. I am grateful for that ... It also means that I'm a cute girl singing a rock song in an alto voice!"

As for Dolly, the flamboyant entertainer admits she feels a certain kinship with her many gay and lesbian fans."I think it's because they know I'm different too, and it took me a long time to be accepted," she reasons.

"Plus, a lot of my gay guy friends love to dress up," she adds. "I think they just appreciate the fact that I love everybody for who they are."

Dolly did have some strong words, however, for Houston megachurch pastor Joel Osteen, who earlier this month stated that "homosexuality is not God's best work." "I don't want to talk about him," she said with a laugh. "I think God made us who we are and how we are, and I don't think if [Osteen] was a religious person, he would be judging people."

Dolly herself has weathered gay rumors. She and assistant Judy Ogle are constantly spotted together, and their close friendship (they've also been best friends since the third grade) eventually fueled speculation about whether the two were romantically connected, as well.

"We're totally honest, open, and comfortable with each other," Dolly told AARP magazine of her friendship with Judy. "We've been accused of being lovers. We do love each other, but we've never been like that."

Dolly shrugs off the rumors and insists that the "I dos" she said 43 years ago with husband Carl Dean were meant for life.