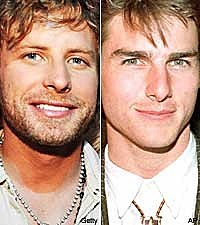 If Dierks Bentley wasn't on stage raising the bar for other guitar slingers these days, you might just find him behind a bar slinging drinks. Dierks tells the Youngstown, Ohio Vindicator newspaper that he's a huge fan of the 1988 Tom Cruise film, 'Cocktail.' And when it comes to getting a crowd worked up, he's learned a thing or two from his favorite bartender.

"Hey man, 'Alabama slammer, the velvet hammer.' That's one of my favorite movies of all-time ..." says Dierks, quoting lines from the film. "'I make drinks so sweet and snazzy'... It's a great movie. That's kind of my job -- to get out there, break something, get a fight started and get this party started! Plus, we do as much as we can before the show, whether that's trying to get a workout in to sweat out the beer from the night before, or taking the Jeep out and hanging out with people, tailgating a little bit to pick up on their vibe and energy so we can bring that backstage with us."

Anyone who's been to Dierks' show lately has probably seen him hanging out at the 1977 Jeep CJ-7 trailer he hauls behind his bus.

"It's kind of freaking them out and surprising them for a little bit, but it's fun," says the singer. "Everyone thinks you want to be backstage, but it's most fun out there where people are tailgating and playing corn hole. It's fun to get out there and hang out for a little bit and give out some free beer and head back in."

So just how did this whole free beer thing get started? Well, it helps to have a willing sponsor.

"I have a deal with Bud Light," says Dierks, adding, "I have more beer than I know what to do with. So, I either have to leave it behind at the venue or just give it away to some deserving fans. So it's like, 'Hey man, here's some beer. Come out and see us!'"