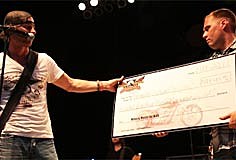 Dierks Bentley may have had to dash right from headlining duties for the Jägermeister Tour to the recording studio to finish his new album, but he somehow managed to also take time out to give back. The tally is in, and Dierks' most recent Miles & Music for Kids event has raised more than $143,000 for Nationwide Children's Hospital in Columbus, Ohio. More than 1,000 bikers stretched eight miles behind Dierks as he led the pack to the LC Pavilion, where more than 4,000 fans had gathered for an afternoon concert.

"I am just trying to use celebrity as positive currency," Dierks tells The Boot, noting how grateful he and his wife Cassidy are that their two daughters are healthy. "I wanted to do things for a local hospital and thought pairing cycles and music would be a great way to do that."

Dierks has hosted the Miles & Music for Kids event for five years. It started in Nashville but he soon partnered with Nationwide Insurance, CMT One Country and the Children's Miracle Network to expand it to other cities.

Later this year, events will be hosted in Chicago and Nashville. For more information about Miles & Music for Kids, check Dierks' website.