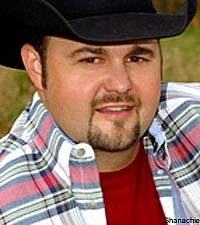 In May, The Boot announced that Daryle Singletary and his wife Holly are first-time parents-to-be, expecting a set of twins. This week, the couple found out they are having two boys.

"We were hoping for one boy, but to have two boys, that's just double the trouble," Daryle tells The Boot. "I am happy to carry on my last name with two sons now."

Daryle and Holly plan on naming their sons Mercer Ellis (Mercer is Holly's maiden name, and Ellis is Daryle's great grandfather's name) and Jonah Michael (Jonah is a Biblical name the two liked, and Michael is Holly's father's name).

The twins, due on November 9, will be the first for both Daryle and Holly, who have been married for eight years.

Daryle is best known for the hits 'Too Much Fun,' 'I Let Her Lie' and 'The Note.' His latest album, 'Rockin' in the Country,' was released last year.