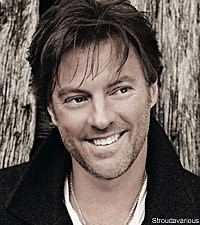 Darryl Worley makes no apologies for posing (semi-nude) in the July 2007 issue of Playgirl magazine -- even if his mom was a little apprehensive. "[She] talked to me about that," Darryl tells The Boot. "I said, 'Chill out, I didn't flag the lower unit. Everything is cool."

Now, two years later, the singer has settled into fatherhood, helping wife Kimberly take care of their 18-month-old baby girl Savannah Gail. It's an experience that he says has changed his life more than he ever expected it would.

"I've really made some changes in my choice of words and language since my baby has come along," Darryl admits. "I've got a long way to go. I've still got to work on it. I've just got a bad temper. I've got an issue with that, and we're working on it. I see the way she acts, and I think, 'She's probably patterning that after me!'"

More than anything, Darryl says being a dad has helped narrow his focus and has even forced him to get his priorities in order. "I never had that before, so she's a gift in a lot of different ways, and it's made a different person out of me. I'm hopefully starting to soften a little bit and not have such a hard edge about me. Her mother is praising God for that. It's difficult to do when you stay on the road all the time. It's a hard thing to juggle, but we're going to figure it out. We're going to get this career off where I can afford another bus again, and we're going to take them out with us."

So would Darryl veto the idea of his wife posing for Playboy magazine? "No, as long as she did the same thing I did," he cautions. "She would just have to cover up the goods."