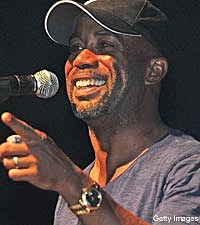 Darius Rucker kicked off the 2010 CMA Music Festival with great music for a great cause. The Darius and Friends St. Jude benefit concert on Monday, June 7, featured performances by Radney Foster, Randy Houser, Jamey Johnson and Jake Owen. Thanks to the fans in attendance, $48,720 was raised for St. Jude cancer research.

During the show, Darius treated fans to songs from his breakthrough country album, 'Learn to Live,' along with a sneak peek at his upcoming album, as he previewed its first single, 'Come Back Song.' He also called Randy on stage to collaborate on Dobie Gray's 'Drift Away.'

The evening's finale, a performance of Hank Williams Jr.'s 'Family Tradition,' featured all the artists on stage as well as a surprise guest appearance by Kid Rock on guitar.

"I got to perform three songs with Radney Foster -- the man who inspired me to get into music," Darius beamed after the concert. "I could not have envisioned a better night. I'm so thankful to the staff at St. Jude, my management team at McGhee Entertainment, the artists, my band, and everyone that made this event such a success."

'Come Back Song' impacts radio on June 28 and will appear on Darius' sophomore album on Capitol Records Nashville, slated to hit shelves this October.