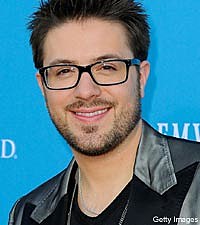 Milwaukee native Danny Gokey is known as much for his generosity as he is for his vocal chops. Already the founder of Sophia's Heart Foundation, a charity he created and named for his late wife, which donates musical instruments to students, the 'American Idol' finalist also opened a flood relief center in the wake of Nashville's devastating May floods. And now, the singer is extending his altruism even farther, by partnering with Wisconsin Vision to provide free vision exams for children and families in need.

The program, called Clear Days Ahead, is the first medical relief extension of Sophia's Heart. To kick it off, Danny spent a few hours visiting with a local store, which attracted more than 1000 fans in a few hours. "With Thanksgiving and the holidays coming up, we wanted to use my visit today to help give back," Danny explains. "We're so grateful to the many fans who have been so generous with both their time and hearts to support the community."

As part of Danny's involvement, the 30-year-old will exclusively wear Wisconsin Vision glasses, appear in commercials and on billboards, and make in-store appearances. In addition, Danny will donate all his old glasses via an online auction to raise funds to continue the program. In exchange for his charitable contributions, Wisconsin Vision will also donate $10,000 to Sophia's Heart Foundation.

"Milwaukee will always be home and supporting area-based businesses is important to me," Danny says. "I'm known for my eyewear. With Wisconsin Vision I will not only have the best in fashion, but also the most accurate lenses available made right here in Wisconsin by a family-owned company."

The former truck driver turned singer says he has one goal in mind, and it has nothing to do with album sales or chart success. "I have a mission and that's to help people," he told The Boot. "That's what I want my music to do. I want it to be fun and I want it to be a very cool way of just giving people hope ... America made my dream come true. They voted for me and they believed in me, and I want to make other people's dreams come true now."