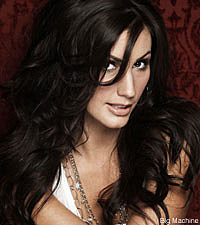 It's been three years since Danielle Peck introduced herself to country radio with her humorously unique debut single, 'I Don't.' Singing about the plight of the single lady, she has managed to present herself to fans as both the girl-next-door who has the same problems they do, and as the brunette bombshell they look up to.

Now, the 30-year-old Ohio native is back with a sophomore release of music that shows a little more of a serious side, without abandoning the playful side that put her on the country map. The Boot talked to Peck about 'Can't Behave' -- the album released digitally on Tuesday. We also get the scoop on managing business pressures and romantic rumors in this candid chat.

The first single is 'Bad For Me,' which is about all the things we love that get us into trouble. What is your biggest guilty pleasure?

My biggest guilty pleasure is probably sleeping in too late. That's not in the song, but staying out too late is, so that goes hand in hand! [laughs]

'Brick By Brick' is another song that adds to your reputation of being so relatable to fans. Is it autobiographical?

It is. It talks about where I came from, how I was raised and how proud I am to be who I am. I really wanted a song that encompasses everything that made me who I am today. There are a lot more songs on this record about my family -- to show what makes me who I am. I'm very close to them. I see them almost every day!

Does that include 'Do It For Me,' the beautiful song about begging someone to get sober?

I wrote this song a few years ago about my brother. I didn't plan on it going to radio -- it was more just for him. But we tried it out for an audience, and it just got such a reaction. People were coming up to me after the show saying they'd been through something like this. Or, 'I was that family member to someone else.' It's great, because it's something I went through in my life, and to be able now to help someone else now who's going through a similar situation. My brother has been clean and sober for three years now. And if it wasn't for him being OK now, I probably wouldn't be able to put that song on a record or sing it live.

How did you decide to title the album 'Can't Behave'?

I was writing with Kristen Hall, formerly with Sugarland, one day. She played me some songs that she thought I would like. This was one of them, and one of her friends Courtney Jaye had actually cut this song and had it on the pop charts. But it was so perfect for me! It's a lot of fun, playful -- very much me.

So when was the last time you were caught misbehaving?

Every day at least once! [laughs] I probably will again tonight. I always find myself getting into some kind of trouble. 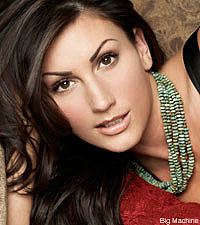 Did you feel more or less pressure with this second album than with your first?

Probably more, but what you've got to do is put your best foot forward and stick it out there. If people can relate to you on the first record, you need to keep that relationship going on. And then you won't let them down, because you're sticking yourself out there. And on this second record, there's more on the line, so I've put more of myself out there. There's deeper emotion and a different side of me that I didn't show on the first record. The first record was more party-girl, going out and having fun -- a lighter side of me. I dig deeper on this new record and show more of my soul.

Knowing what you know now about the business, if you could go back and change anything between the release of your first album and now, would you?

Oh girl, do we have all day? [laughs] But if I changed anything, would I be where I am now? I guess I wouldn't change anything! There are things that I could have done differently and better, but I think I'm on track.

You wrote your first song at age 10. Do you remember what it was about?

Yes! Flowers and trees and what love looks like to me. [laughs] It was cute. I remember writing it with pink ink and showing it to my dad. And from then on, I've been writing everything down and putting it to music.

As a songwriter, what's one song you wish you'd written?

They say less is more. Sometimes the more simple the song, the more depth it has. Songs from the era of Loretta Lynn, Patsy Cline and Tammy Wynette -- that's what I gravitate to. Tammy's 'Til' I Get It Right' is very simple and to the point, yet very emotional.

What's the funniest gift a fan has ever given you?

For my birthday, one fan gave me a walking cane. [laughs] I think he thought it would be cute and funny. But giving a woman a walking cane doesn't say much more than 'You're getting old!'

Any marriage proposals from your male fans?

Yeah, actually through MySpace there have been a few proposals. I'm like, 'Um, this is wonderful, but ... delete, delete!' But seriously, my fans on MySpace are great and have been so nice to keep up with me.

What are your biggest turn-ons and turn-offs with guys?

Turn-offs are definitely pick-up lines. They never work! A turn-on for me is just a regular conversation -- being able to talk without being hit on.

Has dating in Nashville changed now that you're famous?

I'm dating right now, and I don't know if it's changed but I definitely don't get out as much. Being on the road so much takes a toll on a relationship.

Any truth to the rumor that your relationship with John Stamos is a little more than friendly?

[laughs] There's nothing going on -- I'm not sure where that rumor came from. He's a friend. We used to hang out a little bit more than we do now.

Have you ever gotten in trouble for writing about a guy in your life?

Yes I have! 'I Don't' was about a guy I was in a relationship with. And I didn't really realize when I wrote it that he might hear it on the radio. So once it was out there, I kinda had a little panic attack! [laughs] I couldn't really take those words back -- too late! So I don't know that I really got in trouble, but I did feel a little awkward.