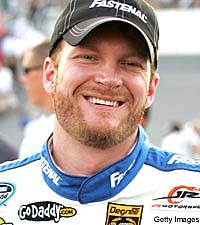 NASCAR's Dale Earnhardt, Jr. may fine-tune his No. 88 AMP Energy/National Guard Chevrolet Impala so he can fly 180 mph on a race track each week, but when he's off the track, he turns on his car radio or flips on his iPod to tune into country music. Country music has been a passion for Dale Jr. since he was a kid roaming the foothills of North Carolina.

"I remember listening to all the greats – Johnny Cash, Willie Nelson, Waylon Jennings, Hank Williams Jr. and all those guys," Dale Jr. tells The Boot. "Dwight Yoakam [is] really cool and seems like a good guy and really laid back. He seems real intricate ... kind of unique in his personality."

Meeting Dierks Bentley was a highlight for the NASCAR star. "Dierks was great, and we've become really good friends," he says. "I think he came to a race or two, and we walked up on pit road, and I think almost at the same time looked at each other and said, 'My girlfriend dates me because I look like you' [laughs]. He's a real neat guy."

The 35-year old driver has a few favorite songs he keeps on his iPod. "'I'm Gonna Hire a Wino [to Decorate Our Home]' by David Frizzell and 'Redneck Girl,' by the Bellamy Brothers are two songs I love ... also 'Louisiana Saturday Night,' by Mel McDaniel is a favorite."

And if he were compiling a playlist with a driving theme? "'Driving My Life Away' is fun. It's a quick-paced song that I love to listen to. I love Eddie Rabbitt. I've got several of his songs on my iPod. 'Life Is a Highway' [Rascal Flatts] was a great song. Everybody loved it when it came out. 'I've Been Everywhere' [by Johnny Cash] ... I've got that on my iPod and I listen to it [a lot]."

Dale Earnhardt Jr. will be among the celebrities gathering in Nashville for the the CMA Awards on Nov. 11. In addition to getting the chance to meet and greet many of his favorite country artists, he'll act as escort for a special member of the U.S. Armed Forces.