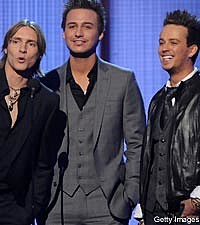 Five of country music's hottest "New Faces" were showcased Friday night (Feb. 26) in Nashville as part of the annual Country Radio Seminar. Love and Theft, Randy Houser, Chris Young, Gloriana and Justin Moore all took the stage in front what may be the toughest crowd to please, as radio programmers and industry critics filled the room for the CRS New Faces show.

Lyric Street's new trio Love and Theft wowed the audience with their unique harmonies, as they opened the show with 'Can't Go Back,' a song found on their debut album that hit stores last August. "Thank you all for playing this next song," Eric Gunderson said prior to introducing their current single, 'Dancing in Circles.' "We couldn't do this without you."

The trio also played their rendition of the current Martina McBride hit (which Love and Theft's Stephen Barker Liles co-wrote), 'Wrong Baby Wrong,' along with their own, career-launching hit, 'Runaway.'

Randy Houser took the stage for the night's second performance, opening with his huge hit, 'Boots On.' Rockin' and ready to show the room a good time, Randy looked cool and confident as he thanked country radio for helping take the song all the way to the Top 5. "We needed that ... we've been out on the road making no money for too long!" he quipped.

Randy continued with his current single, 'It's All About You,' which had the audience singing right along with every word. "This is something I've dreamed about my whole life since I was 5-years-old," Randy said prior to flawlessly singing his debut single, 'Anything Goes,' which brought the entire room to their feet before he exited the stage.

Chris Young, looking relaxed, took the stage next by opening with his recent chart-topper, 'Gettin' You Home (The Black Dress Song).'" With a big grin on his face, Chris thanked the radio executives in the room for making that his first No. 1 single. He then put down his guitar and worked the stage front while belting out 'That Makes Me' off his latest album. "I'm so proud to be out here with you guys tonight," Chris said as he strapped his guitar back on, next delivering his current single, 'That Man I Want To Be.' He finished off his set by playing 'Voices' and his version of 'Rainy Night in Georgia,' which had his deep voice rumbling throughout the room and once again brought the crowd to their feet.

Gloriana took the stage looking like seasoned performers who have been making music together for decades. "We've had a crazy year and it all started with this song right here," noted Tom Gossin as they followed up their opening song, 'If You're Leavin',' with their debut Top 15 hit, 'Wild at Heart.' They kept the four-part harmony flowing through the Doobie Brothers classic, 'Black Water.'

"We were asked to support the U.S. Olympics with this next song," said Gloriana's Cheyenne Kimball, as the group launched into their latest single, The World Is Ours Tonight.' "We've been getting some amazing feedback on it."

The final and most entertaining performance of the evening belonged to new daddy, Justin Moore. The stage was set perfectly for the fun-loving southern guy, complete with a four-wheeler center piece. He took the stage like a pro, singing his latest single, 'Backwoods.' He then brought the show up yet another notch with his song, 'Hank It,' before bringing it back down with the poignant tune, 'Grandpa,' a tribute to his late "Paw-paw" who passed away in November.

He then delivered a moving performance of 'Small Town U.S.A.,' with the look in his eyes of a young man who is truly loving the life he's living. He closed out the night by performing a song that "got me in a little bit of trouble, but also got me my record deal" -- 'I Could Kick Your Ass.'

Of the artists on the "New Faces" lineup, both Chris and Gloriana are in the running for new-artist trophies at this year's Academy of Country Music Awards. Fans can vote now online by clicking here. Other artists nominated include Luke Bryan, Jamey Johnson, Bomshel, Joey + Rory, Steel Magnolia, the Eli Young Band and The Lost Trailers.