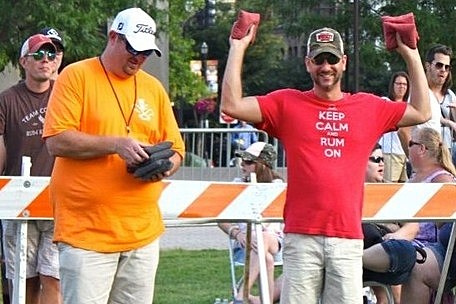 Rising country star Craig Campbell held his first-ever Celebrity Cornhole Challenge in Nashville on June 4. The event, which Campbell intends to hold annually, took place at the public square in downtown Nashville, raising money for the TJ Martell Foundation's colon cancer research in honor of Campbell's father, who passed away from colon cancer at the age of 36.

Campbell and his teammate Eric Lindsey ended up capturing the top spot in the tournament, which was played with bean bags. Brad McDonald and Corey Hadley came in second, with LoCash Cowboys coming in third. Bigger Picture artist Ryan Kinder and Bigger Picture President Michael Powers came in fourth.

Baylou, Kinder and Niemann also performed, with Campbell closing out the event by singing his hit 'Fish.' The event raised $15,000 for the TJ Martell Foundation.

"I'm immensely grateful to all my fans and friends who came out to take part in my first Celebrity Cornhole Challenge. It meant a lot to have so much support in our efforts to toss out colon cancer," Campbell says in a press release. "We are already making plans for next year's event, and I'm strategizing how to land a win again in year two!"

Campbell recently released his sophomore album, 'Never Regret.' Its first single, 'Outta My Head,' is currently in the Top 25.