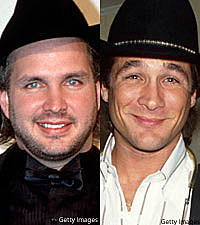 Where were you in '89? It was the year Taylor Swift was born, and the year Keith Whitley died.

And while veteran country acts Alabama, Dolly Parton and Ronnie Milsap continued to have hit records, 1989 will also be remembered for giving country music fans their first taste of Garth Brooks, Clint Black, Alan Jackson and Travis Tritt. Dubbed "The Class of '89," each of them had their first major hits during that year, and dominated the early 90s, increasing country music's popularity and visibility like never before.

In celebration of the 20th anniversary of the debut of the class of '89, Country Weekly magazine pays tribute to these stars and more, with their February 23 issue. Look for it on newsstands now.

Categories: Country News
Comments
Leave A Comment
45 Years Ago: ‘Here You Come Again’ Becomes Dolly Parton’s First Gold Single
Story Behind the Song: Chris Young, ‘All Dogs Go to Heaven’
Report: The 2023 Grammy Awards Might Include a Loretta Lynn Tribute
‘King of the Hill’ Reboot Is Coming to Hulu
Josh Turner Will Celebrate 20 Years of ‘Long Black Train’ With New Tour
30 Years Ago: Garth Brooks Sings the National Anthem at Super Bowl XXVII
13 Years Ago: Taylor Swift Sets a Record With Grammys Album of the Year Win
Luke Bryan Will Get His ‘Country On’ With a Major 2023 Tour
Reba McEntire’s ‘Reba’s Place’ Is Officially Open for Business — Peek Inside! [Watch]