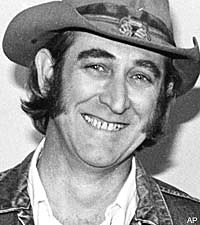 The Country Music Hall of Fame, the highest honor one can achieve in country music, will soon add the names of performers Don Williams, Jimmy Dean and Ferlin Husky to its ranks, along with that of songwriter/producer Billy Sherrill.

"I feel extremely honored and overwhelmed with this news," Don Williams said. "It is unbelievable that CMA thought about me in this manner." One of the world's most popular country artists, Williams scored No. 1 songs with (among others) 'You're My Best Friend,' 'Love Me Tonight,' 'Some Broken Hearts Never Mend,' and 'I Believe in You,' which was also a Top 30 pop hit in 1980.

Jimmy Dean, perhaps best known for the 1961 pop-country hit 'Big Bad John,' as well as his numerous appearances in TV and film roles, joked, "I thought I was already in there. Seriously, it brought a huge grin to my face. I am honored."

Ferlin Husky, one of the most successful country and pop acts of the '50s and '60s, whose biggest hit was the 1960 crossover smash, 'Wings of a Dove,' said, "I'd like to thank my Lord Jesus Christ for dying for me, saving my soul, and bringing me into the world as a country boy. And also, for giving me the talent to sing, entertain, and help convert millions around the world to Country Music. I'm still a country boy and proud of it. In the words of my close friend, the late Stringbean, 'I sure am glad I'm me!'" In 2009, Husky battled several health problems including congestive heart failure.

"Anything I have ever accomplished would have been totally impossible without the help and support of the greatest songwriters and musicians in the world, and of course what I stole from Owen Bradley," said Billy Sherrill, the man who is perhaps best known for discovering and producing numerous hit records for Tammy Wynette.

The ceremonies for the new inductees will take place at the Country Music Hall of Fame and Museum later this year. Since 2007, the Museum's Medallion Ceremony, an annual reunion of the Hall of Fame membership, has served as the official rite of induction for new members.

More on the 2010 Country Music Hall of Fame inductees