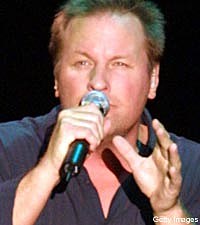 Collin Raye's first No. 1 hit, 'Love Me,' is a poignant love story about two grandparents who wait for each other in this life and the next. Now that he's a grandparent himself, Collin is telling another kind of love story, this time about a grandfather and his granddaughter, that would touch even the Grinch's heartstrings. Collin wrote 'She's With Me' for his nine-year-old granddaughter Haley, who has a debilitating neurological disorder.

"Haley inspired me to write the song," Collin tells The Boot, with a lump in his throat. "In life, bless her little baby heart, she can't do anything. She's totally helpless in every way. She can't hold her head up, she can't sit up, she can't roll over, she can't scratch if she itches, she can't let you know if she's in pain. It's just a miserable little life she has ... But, I always feel like it's such an honor to take her places and be her representative on this earth and say, 'Oh, hey, she's with me.'

"The idea hit me," Collin continues, "I just realized that when she leaves this earth, she's going straight to Heaven. There's no stop-off point for that baby. She's the most perfect human being that I've ever encountered. How could she have ever sinned or even thought about anything bad? So she's perfect and clean. And at the gates of Heaven, I'm hoping she'll be standing there with me, and when He looks at me and says, 'I don't know bud, we got a lot to think about here before we let you step in.' ... I'm hoping because she was with me, and because I was her liaison in this world, that she'll be mine and get me into the gates of Heaven. I hope I can hold on to her little coattail, and let her say, 'Let him in, he's with me.'"

Collin says he wrote the song in a matter of just about 20 minutes.

"I was on an airplane," he says. "I don't write every week. I write when God gives me an idea that I think is worthy of working on. And I carried the idea around for about six months but I just didn't sit down to do it, and I waited until I was overwhelmed. And whenever I become overwhelmed, the song comes out fast ... my rhymes and my lyric, my poetry – it just comes out."

'She's With Me' is on Collin's new album, 'Never Going Back.'