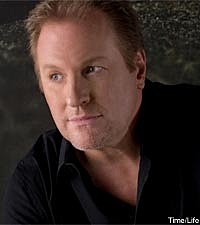 Condolences to singer Collin Raye, who announced the death of his 9-year-old granddaughter, Haley Bell, on Saturday (April 3). Haley suffered from a neurological disorder which had not been correctly diagnosed during her short life. At age two, she began losing her ability to walk, stand, crawl, sit up straight, hold her head up and control her hands. By the time she reached four years old, she had lost even more functions including being able to speak and eat by mouth.

"In life, bless her little baby heart, she can't do anything," Collin told The Boot last summer of Haley's medical condition. "She's totally helpless in every way. When she leaves this earth, she's going straight to Heaven. There's no stop-off point for that baby. She's the most perfect human being that I've ever encountered. How could she have ever sinned or even thought about anything bad? So she's perfect and clean."

On Collin's latest album, 'Never Going Back,' the singer penned a song inspired by Haley titled 'She's With Me.' "It's just a miserable little life she has, but I always feel like it's such an honor to take her places and be her representative on this earth and say, 'Oh, hey ... she's with me,'" Collin said. "At the gates of Heaven, I'm hoping she'll be standing there with me, and when He looks at me and says, 'I don't know, bud, we got a lot to think about here before we let you step in' ... I'm hoping because she's was with me and because I was her liaison in this world, that she'll be mine and get me into the gates of Heaven. I hope I can hold on to her little coattail and let her say, 'Let him in ... he's with me.'"

Collin and his family will be announcing the creation of the Haley Bell Foundation some time in the near future. There is also a potential benefit concert that will take place in honor of Haley and the new foundation. The family is asking in lieu of flowers that donations be made to the foundation when it's up and running. In the meantime, fans who wish to send cards to Collin and his family may do so to Collin's fan club president, Karen Willard, 1806 Meadow Glen Circle, Mt. Juliet, Tenn. 37122 or by emailing letters to karenwillard@comcast.net.

Filed Under: Collin Raye, CollinRaye
Categories: Country News, R.I.P.
Comments
Leave A Comment
Back To Top
Who Is Lainey Wilson? 5 Things You Need to Know