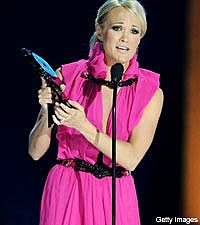 Carrie Underwood was the big winner at the 2010 CMT Music Awards in steamy Nashville, Tenn. Wednesday night. The country superstar took home CMT Performance of the Year for her live rendition of 'Temporary Home' from the CMT special, 'Invitation Only: Carrie Underwood.' She also stakes claim to the night's biggest prize -- Video of the Year, for 'Cowboy Casanova.'

"This is very special to me," Carrie said upon accepting her first award, thanking the fans. "You guys are what makes all of us. We couldn't do what we do without you guys."

Miranda Lambert also thanked fans in her acceptance speech for Female Video of the Year for 'White Liar,' in an upset win over Taylor Swift ('You Belong With Me'), Carrie Underwood ('Cowboy Casanova') and Reba McEntire ('Consider Me Gone').

Male Video of the Year honors went to Keith Urban for 'Til Summer Comes Around.' Lady Antebellum were the Group Video winners with their smash hit, 'Need You Now.' And the soon-to-split Brooks and Dunn take home their last CMT Award as a duo, for 'Indian Summer.'

See the full list of winners and nominees after the jump. 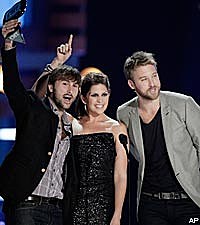 VIDEO OF THE YEAR

(Final nominees announced during the June 9 live telecast, with final voting held online at CMT.com during the show.)

Taylor Swift – 'You Belong With Me'

MALE VIDEO OF THE YEAR

*Keith Urban – ''Til Summer Comes Around'

FEMALE VIDEO OF THE YEAR

Taylor Swift – 'You Belong With Me'

GROUP VIDEO OF THE YEAR

Gloriana – 'How Far Do You Wanna Go?'

DUO VIDEO OF THE YEAR

Steel Magnolia – 'Keep On Lovin' You'

Laura Bell Bundy – 'Giddy On Up'

Easton Corbin – 'A Little More Country Than That'

Steel Magnolia – 'Keep On Lovin' You'

COLLABORATIVE VIDEO OF THE YEAR

(Best video that featured a special collaborative appearance by artists)

CMT PERFORMANCE OF THE YEAR

(Musical performance on a television show, series or variety special on CMT)

Reba McEntire – 'Consider Me Gone' from 'Invitation Only: Reba'