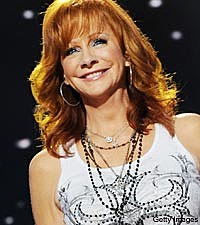 Reba, Josh Turner, Miranda Lambert, Julianne Hough, Keith Urban and surprise guest Kid Rock made it a night to remember for fans Friday evening at Nashville's LP Field during CMA Music Fest. Fans were treated to special giveaways -- including two guitars autographed by all the evening's participants -- as well as surprise appearances by Sarah Buxton and Little Big Town and even an on stage wedding.

Following the presentation of colors, the Band Perry took the stage to sing the National Anthem and delivered a stunning version of the difficult to sing opening number. There's nothing as moving as sibling harmony and Kimberly, Reid and Neil Perry served up a beautiful rendition of the anthem that was emotionally riveting, more like a prayer than a bombastic event opener.

All eyes were on the sky as a jet roared above the stadium signaling time for the party to get started. Storme welcomed Tennessee Titans kicker Rob Bironas to the stage to assist with hosting duties and #2 thrilled the crowd by tossing out footballs signed by Titans Kenny Britt and Cortland Finnegan. 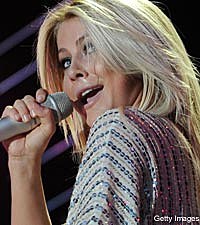 Next up, Storme introduced the crowd to Julianne Hough by reminding them she debuted on the country music scene with a No. 1 album and alerting them to the fact that she was working on her sophomore record and filming "Burlesque" with Christina Aguilera, Cher and Laura Bell Bundy. Julianne took the stage at LP Field in a short, shimmering mini dress and boots and delivered an energetic set. In addition to her country music career, Julianne is well known as one of the professional dancers on ABC's hit show 'Dancing With the Stars'and her Music Fest performance combined some of her sultry dance moves with lots of country heart and soul. When she closed out her set with 'That Song in My Head,' from her debut album, the crowd was dancing and singing along.

Josh Turner had the crowd on its feet from the beginning of his six-song set that opened with 'Your Man' and included 'Firecracker,' 'Would You Go With Me,' his new single 'All Over Me' and his breakthrough hit 'Long Black Train.' During the latter number, the crowd enthusiastically sang along and fans on the field started their own train, grasping the person in front of them and snaking through the crowd dancing and yelling. "Thank y'all for loving Country Music," Josh said as he closed his performance with his recent No. 1 hit 'Why Don't We Just Dance,' as the crowd swayed under the warm night sky. 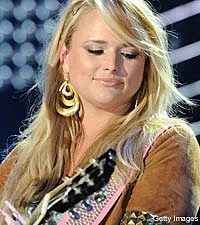 It was a little after 9:00 PM when Texas bombshell Miranda Lambert took the stage, opening her set with 'Famous in a Small Town' and then launching into an explosive performance of 'Gunpowder and Lead' that had the crowd on its feet. Miranda looked amazing in a short, shiny gold mini skirt, and black t-shirt emblazoned with a cowboy boot and topped by a brown jacket with super long fringe.

"Thanks for making this my second No. 1," she told the crowd before she performed the gorgeous ballad 'The House That Built Me.' Then wielding her guitar with a mischievous grin, she said, "This is for all the mean girls out there," and launched into 'Only Prettier' from her ACM-winning album 'Revolution.' She followed it with her first chart-topping single 'White Liar' and closed her set with an incendiary performance of 'Kerosene.'

The Bachlorette's Jillian Harris and Tracy Hudson from ABC's 'Extreme Makeover: Home Edition' took the stage to introduce Keith Urban and the crowd went wild. He opened with 'Kiss a Girl' and then sailed into 'Days Go By' as a barrage of beach balls suddenly began bouncing around the stadium. "Are we feeling good Nashville?" Keith asked and the crowd roared back in the affirmative as he launched into 'Sweet Thing.'

After that tune, he thanked all the fans who had traveled so far to attend CMA Music Fest. "As you can see Nashville is alive and well and open for business," he said. Keith's set percolated with energy and included such fan favorites as 'Love Somebody Like Me,' but the highlight came when he welcomed Sarah Buxton and Little Big Town's Karen Fairchild and Kimberly Schlapman to the stage and introduced legendary Nashville producer Tony Brown on piano to join him on the Beatles classic 'A Little Help From My Friends.' During the performance, video 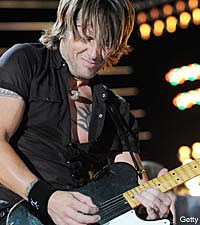 screens showed powerful images of Nashvillians rallying together to help each other during the flood and showed attendees footage of what LP Field had looked like just weeks earlier filled with flood water.

After Keith, his band and guests exited the stage, Storme returned telling the crowd it was "so good we're gonna do it one more time." The show was being taped for an ABC television special to air Sept. 1 and due to a technical problem, the performance needed to be repeated, but the crowd didn't mind getting an encore of the stellar performance.

Earlier in the evening, Storme had mentioned Blake Shelton and Miranda Lambert's recent engagement and alluded to the fact that the wedding theme would continue later in the show. After Keith's performance, Storme announced that two people who had help build the massive set had fallen in love and were going to get married right there on stage in front of 70,000 witnesses. Little Big Town's Phillip Sweet and Jimi Westbrook stood with groom John Wellman while LBT's Kimberly and Karen supported bride Casey Morris and her maid of honor. The bride wore a gorgeous white gown, trimmed in red. The couple said vows they'd written to each other and then repeated traditional vows spoken by the officiating pastor.

"Thank you all for being part of the largest Country Music wedding I've ever seen," said Storme as the bride and groom exited the stage after a photographer took a wedding portrait.

While waiting for Reba to take the stage, fans did the wave, listened to music over the loud speakers from Brad Paisley's "Play" album and Alan Jackson's 2008 "Good Time" disc. Fans also sent text messages, which were displayed on the video screens on stage. The texts included loving messages to family members, suggestions for artists they wanted to see on the LP Field stage next year such as Craig Morgan, and salutes to their favorite artists. Among the more interesting texts: "Kid Rock is the king of my trailer park." "I love mullets." "Nashville has inspired me. Can't believe flood waters devoured the city." "The Gators love CMA Music Fest. If you're not a Gator, you're Gator bait." "Kid Rock is neither kid not rock, think about it." "Nicole, you're lucky Keith didn't meet me first."

Reba's long awaited set began with a video montage of career highlights, then the Oklahoma redhead launched into 'Strange.' She looked svelte in black jeans and a white tank top with a cross emblazoned on the front. She delivered a feisty performance of her hit 'Consider Me Gone' and then thanked fans for being patient in waiting for her to take the stage while they resolved some technical issues. Her five-song set featured four songs from her current album 'Keep on Lovin' You,' including the title track, penned by Ronnie Dunn and Terry McBride, and 'I Want a Cowboy.' Reba closed her set with a potent performance of her hit 'Fancy' that left the crowd screaming and cheering. 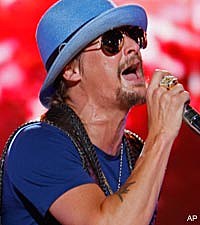 Kid Rock took the stage shortly after midnight whipping the crowd into a frenzy with the title track of his album 'Rock n Roll Jesus.' He launched into the Lynyrd Skynyrd classic 'Sweet Home Alabama,' which of course segued into his crossover hit 'All Summer Long.' He then gave fans a taste of his upcoming record with the new song 'It Feels Good to Me.' He followed with 'Low Life' and served up a bit of the Georgia Satellites classic 'Keep Your Hands to Yourself.'

He told the crowd the first single from his new album was inspired by visiting the troops serving in Iraq. "I started thinking about what freedom meant to me," he said before launching into 'Born Free' while fans in the crowd waved American flags and cheered. He said goodbye at the close of the song, then smiled and told the crowd "We're not done, I was just doing that for TV. Now we'll have some fun!"

The crowd roared their approval as he took to the piano for the next number and then he jumped up and stormed around the stage for the closing song 'Cowboy,' which included a brief homage to Waylon Jennings as he served up a bit of 'Good Ole Boys,' the Dukes of Hazzard TV theme made popular by Waylon. Though it was nearing 1 am, the crowd was enthusiastically dancing and singing along as Kid closed out with 'Cowboy,' bringing the second night of CMA Music Fest to a rowdy finish.