The Boot contributor Deborah Evans Price is the author of 'The CMA Awards Vault,' which gives readers unprecedented access to the annual Country Music Association Awards, regarded as 'Country Music's Biggest Night.' The coffee table sized book traces the history of the awards show from its beginning in 1967, when it was broadcast on radio, through the glitz and glamor of last year's festivities at Nashville's Bridgestone Arena.

The book features interviews with many of the artists who have appeared on the show, as well as some of the behind-the-scenes people who are responsible for making the show run smoothly. Deborah says the most interesting part of doing the book was hearing about the unscripted or unexpected things that have happened over the years.

"Trisha Yearwood told me that her mother wrote a thank-you note to Irving Waugh, the executive producer of the show, thanking him for putting her on the telecast," the author tells The Boot. "She says he never forgot that kindness. Vince Gill told me after he hosted the awards show in 1997, he went by himself to a Waffle House, where he shared post-awards time with a homeless man and a hooker. He said it was a great year for him, professionally, but personally, he gone through a divorce and lost his father."

In order to write the book, Deborah watched 41 years of the awards telecast, saying it brought back a flood of memories for her, as she had watched many of the shows herself as a youngster. "I always remember Loretta Lynn's beautiful gowns, and as for performances I remember that Dolly's were always a highlight of the show. The Oak Ridge Boys were always favorites of mine, and I remember that Barbara Mandrell was a great host of the show. She always made it looks so easy."

Some of the things Deborah had forgotten were the 1978 incident when Dolly ripped her dress just before she went onstage and had to borrow a coat from Kenny Rogers' wife at the time, Marianne. "I also found out when I interviewed Jeannie Seely that she and Merle Haggard had gotten Bob Wills drunk backstage and he almost missed his Hall of Fame induction," she says with a laugh.

A moment that could have been awkward for Kathy Mattea turned into a turning point in her life. In 1992, the CMA promoted artists wearing green ribbons for environmental awareness, but Kathy decided to wear a red ribbon for AIDS awareness in addition to the green ribbon. "Kathy said a reporter at the [Nashville] Tennessean wrote in an article that she wondered if Kathy would be brave enough to explain what the red ribbon stood for. Kathy wore the red ribbons for three of her friends who had died of AIDS, and in her speech that night she mentioned their names. She told me that was the moment she became an activist." [An interesting side note -- two years later, the singer was one of the leaders in the recording of the 'Red Hot + Country' album, which raised money and awareness for AIDS education.]

It was also interesting for Deborah to hear what the different artists do after the awards show, which isn't always the glamorous after-parties. "Ronnie Milsap and his wife take the limo through Krystal to pick up a few burgers. Brad Paisley gets in his car and likes to take a long drive to unwind. 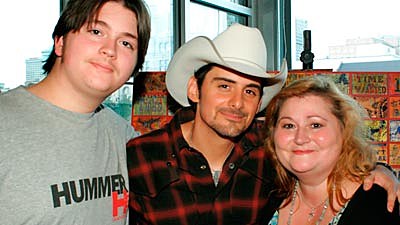 "Brad was one of my favorite interviews, because I felt I got to see another side of his talent," says Deborah, pictured above with her son, Trey, and Brad. "I've always loved his music but was very impressed with his savvy as a television host. He cares so much about the CMA awards broadcast and is extremely involved in the production. For instance, it was his idea to have Little Jimmy Dickens come out last year and spoof Kanye West's intrusion on Taylor Swift at MTV's Video Music Awards."

In talking with some of the behind-the-camera personnel, Deborah found that Sandy Spika Borchetta was sure she was going to be in big trouble after a dress she designed became the center of attention in 1993. "Sandy designed Reba McEntire's infamous red dress with the plunging neckline," Deborah says. Apparently she was questioned about how much the dress would reveal and assured the singer it would be fine. Neither of them anticipated the way the lights would cause the dress to be much more revealing than they planned." Sandy thought she was going to be fired, but it turned out OK because even though Reba didn't win any awards that year, she received more attention from wearing that dress while she and Linda Davis performed 'Does He Love You' than any other artist on the show!"

In a fashion statement of a different kind, Deborah reveals that Marty Roe of Diamond Rio and his wife Robin made some of the jackets he wore when the group first began appearing on the show, and Loretta Lynn also made some of her early awards-show dresses.

The author says she is appreciative of all the artists who took time to talk to her, relaying their stories and memories of the awards, including Brad Paisley, Kenny Rogers, Carrie Underwood, Darius Rucker, Taylor Swift and Charlie Daniels. "It was definitely worthwhile and was a labor of love for me to write. I just hope the fans learn some new things about the awards show and their favorite artists when they read it."

The book includes replicas of awards show tickets, programs and other memorabilia as well as numerous images drawn from the expansive CMA photo vault. 'The CMA Awards Vault' is currently available in bookstores and at online outlets. Buy it here.