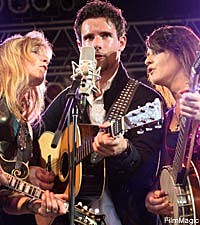 Cherryholmes are back on the road, this time touring behind their latest album, 'Cherryholmes IV: Common Threads,' due to be released June 1.

The two-time Grammy Award nominated family band – comprised of parents Jere and Sandy and kids Cia, 26, Molly, 17, Skip, 20, and B.J., 21 – are the masterminds behind the writing, arranging and production of their music. Listeners will likely find the songs on this album more cohesive and intricate than past offerings, though, thanks to the maturation of the younger members.

"At any one time, one of them can be somewhere just jamming on something," Sandy tells The Boot of her children. "It comes out to be just a really beautiful piece of music ...They interpret [music] in a much more relaxed, more natural way."

Perhaps that's because Sandy – who has studied classical piano and reads music – taught the rest of the family how to play through "porch-style" lessons, many of which stemmed from home schooling projects. The family members called on those skills to create the band about 11 years ago, after the eldest daughter in the family died at age 20.

If a recent Cherryholmes' concert on April 24 in Fairfax, Va. is any indication, the players and their songs are sharper than ever.

'Weaver of Lies,' written by Cia, had a special poignancy as the young artist -- who played banjo on several songs during the concert -- sang "I've been the believer and I was deceived/Now I'm the deceiver, the believer believes in me."

It is, after all, a new world of trial and error for the Cherryholmes' family now that Cia and her brothers have moved out of their parents' home. Molly, who will soon turn 18, will follow.

"That's probably been one of the bigger things that happened, that has been more difficult," Sandy told The Boot prior to the concert. "Everybody just got to where they needed some space. We were living on the road, basically living in a bus for about 300 days a year as a family. Then there came a time as they got older they said 'I have to have different friends. I can't just be traveling in the bus and living in the bus' ...The boys are both engaged now, too. So it's all changing."

Not that the family bonds aren't as strong as ever. Any doubters need only watch the affectionate glances among the members as they shared family stories at the pre-concert meet-and-greet.

One such story Jere told found him driving the family's bus through South Carolina late one night and receiving a misdirected text message that read: "I am feeling very romantic tonight. I wish you were here with me. Love, B.J." Soon after B.J. shared his goof with his siblings, they all sent the same messages to Jere.

That type of down-home humor combined with first-rate bluegrass completely won over the Fairfax crowd.

Watching the Cherryholmes family -- dressed in casual western clothes with a few rhinestone embellishments -- the crowd clapped, sang and laughed as the Cherryholmes played and danced to an array of mainly new songs including 'Live It,' written by Molly, and 'Standing' by Sandy, along with a lovely rendition of 'Idle Minds' by B.J.

With call outs to the military and their families, Cherryholmes sang a heartbreaking rendition of Cia's song, 'This is My Son,' before the group bowed before the standing, cheering crowd.

"We always enjoy playing here and we hope to come back again," Jere told the crowd.

Clearly, the crowd more than returned the sentiment.