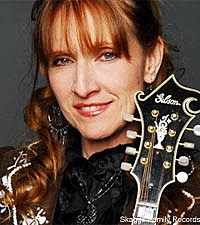 When you hear Cherryholmes' album, 'Cherryholmes IV: Common Threads,' by the four-time Grammy Award nominated bluegrass band, consider it a triumph in home-schooling. Among the four younger members of the band are oldest daughter Cia, who wrote the album's 'When It's Not With Me Every Day,' and her sister Molly, who wrote 'Live It' for the disc. The four Cherryholmes children, including sons B.J. and Skip, now range from ages 17 to 26. They got their musical start when their parents and band mates, dad Jere and mom Sandy (pictured left), decided to work music into their home-schooling lessons.

"We did a lot of different things because we used various teaching methods," Sandy tells The Boot. "If they had been in public school, the teachers would have suggested Attention Deficit Hyperactivity Disorder drugs to calm the boys," she says. "But I was able to use things, such as music, to teach them self discipline. B.J., our fiddler (who began playing the instrument in 1999 at 11) was an especially feisty little guy, but I was able to channel that hyperactivity right into fiddling."

While Sandy stresses home-schooling isn't right for for everyone, she says the 'Don't Give Them Ritalin, Just Get Them Fiddlin',' buttons the band sold during its early days of touring were a hot item.

"I didn't want to home school. I didn't start home-schooling because I was a great believer. It was something we did to get on our feet," says Sandy. "When that happened with Jere's job, I thought, 'Well, I'm home-schooling one, I might as well home school the other two.'"

She kept that commitment even after discovering she was pregnant with their youngest child, Molly.

"What started as a way to keep our kids out of the public schools became something we were doing because of the enrichment of the family," says Sandy. "We found we developed a closeness as a family."

But, cautions Sandy, parents considering home-schooling should also think of it as a full-time calling, carefully weighing all the pros and cons, paying special attention to discipline and having realistic goals in mind. "It can be fun, but people look at it thinking they'll be like The Partridge Family and it isn't like that," she says, referring to the happy and faithful-to-their-goals singing TV family of the 1970s. "There were a lot of struggles especially with our little ones. B.J. ... when he was a little guy, I couldn't keep him at a table for 10 minutes. I'd go into work with someone and come back and he'd be gone!"

For information on Cherryholmes, their tour dates and their new album, visit the band's website.