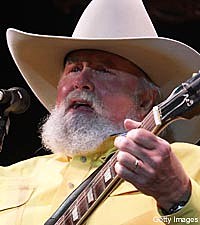 When Charlie Daniels felt the left side of his body going numb while snowmobiling in Colorado last Friday, he realized he was having a stroke ... but he wasn't thinking it was the end. Instead, he just worried about one thing: would he still be able to play music?

"I never seriously thought, 'Well, this is it," the country music legend tells the Associated Press. "I just look for everything to turn out good. And I can still play my fiddle, I can play my guitar ... One of the first things I did when I came home from the hospital in Denver was to pick up my guitar and make sure my fingers still worked on it."

Although doctors told Charlie that feeling would return soon in his hand, the 73-year-old has been determined to speed up the process, and started physical therapy immediately. After doing another session in Colorado this week, Charlie will be finding a therapist when he returns to Tennessee. He has no plans to cancel any of his upcoming shows in February.

Charlie reveals that his stroke was triggered by high blood pressure. "It had gotten higher than what I realized it was," he explains. "We have taken steps to remedy that, and we are back in the game."

Throughout his health scare, Charlie says he took comfort in realizing that "the fingerprints of God were all over" his experience ... pointing out that a plane was immediately available to take him from the slopes to Denver, and that the local hospital in Durango had only recently begun stocking the drug used to break up the blood clot in his brain. "It's just an absolute fact that God was looking after me," he says.

Now that he is recovering, Charlie looks forward to plunging forth in life, with a list of things he intends to do yet, before it's all over. "I want to keep entertaining people ... I want to go fishing in Alaska again. And I want to go back to Israel, which I intend to do in March.

"What the heck," he adds, going for broke-- "I may take up skydiving next, who knows!"