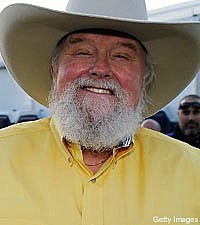 For fans who think the mild stroke Charlie Daniels suffered in January might prompt the veteran entertainer to slow his pace, there's no need for concern. Never missing a single concert date, the living legend resumed touring on Feb. 27 and is happy to be back on stage.

"It felt absolutely wonderful," Charlie tells The Boot of the Florida concert that marked his return to performing following the stroke he suffered while snowmobiling in Colorado. "It was a special night to get back on stage again."

Still, he admits to being a little apprehensive about that first show. "You wonder if you're going to remember all the lyrics, especially this time around," he says, "but it was one of the best shows that we had done in a long time. Everything was just tight. The band played great and the people really enjoyed it. It was a wonderful experience. Every time I walk on stage, it's a special experience and something I thank God for, that I can do something that I enjoy so much."

Charlie says he's not the type to "sit around and think, 'what if?'" but he's had two friends in the radio industry suffer strokes recently and both have had a more difficult road to recovery (one is having to learn to walk again), so he knows that he was very blessed. "I will never believe it was anything other than the hand of God that got me down the mountain," says Charlie, who realized he was having a stroke when he noticed numbness in his left hand and his face.

"We were having a great time that morning," he continues, recalling how the day had started. "We were in place called Beaver Meadows, not too far from Durango. We had gone way up in the mountain. The snow was great. There was a lot of powder, which made it for a very smooth snowmobile ride and we were having a great time. We'd been riding for a while and I got to noticing that my left side was going to sleep, and I thought well I'd been riding a long time and had my hand on the handlebars for a long time and thought it was just going to sleep. Then I started noticing my jaw was numb and I noticed my left foot was numb and I thought, 'this ain't right,' so we actually turned around and started heading back down the mountain."

When they got back to where they had parked their vehicles, friends Cy and Jeannie drove Charlie and his wife, Hazel, to the nearest hospital. Fortunately, Cy and Jeannie hadn't brought their own snowmobiles that day, so they didn't have to waste time in taking the trailer off their truck and could leave immediately for the hospital. (Someone else loaded Charlie's snowmobiles and brought his vehicle down the mountain.) "They had some baby aspirin in the truck and I took about three of those and they took me to the hospital," he says of Mercy Regional Medical in Durango. "They did a little test and said, 'you're having stroke' and asked when I started having this. They said, 'Well you've got about 15 minutes to take this shot or it could start hemorrhaging in the brain.'"

Charlie says he was blessed that everything worked in his favor to get him to the hospital quickly to get the medication he needed, a drug called tPA, tissue plasminogen activator, which breaks up blood clots. "We were on the side of town that the hospital was on," he says. "When we got there, I had 15 or 20 minutes left to get this shot. You have to have it within three hours, and they had only had the serum in the hospital for three months. I don't believe in that kind of circumstances; one thing may be just a circumstance, but no not this. It's like it was orchestrated by God the way it worked out. God was paving the way for me to get there and making sure I got there in time to get things done and get medical care."

Charlie was flown to Swedish Medical Center in Denver, where one of the doctors who treated him was from Nashville and in one of those 'it's such a small world' moments, they discovered she knew Charlie's doctor back home in Music City. Fortunately, Charlie's stroke was mild and he wasn't hospitalized long. "I got there early Friday night and they kept me Saturday and on Sunday they said, 'you can go,' and the funny thing about it when I had gotten to the hospital in Durango, I had taken all my clothes off and put on a hospital gown, so that's how I went to Denver, hospital gown on!" Charlie says with a chuckle. "I didn't even have shoes with me, so some friends of ours went and bought me a warm up suit."

Charlie cautions others to keep an eye on their blood pressure. "When I got on vacation I just hadn't paid attention like I should and I let it get up on me," he says. "It just got up higher than what we would have guessed it would have and caused me to have a stroke."

He also advises others to pay attention to the warning signals and seek medical attention at the first sign of trouble. "The problem is that a lot of people will ignore it," he says. "It's not really painful. It's not something that hurts you. It's numbness and maybe you'll think 'well this is going to go away.' A lot of people do think that and they wait too long. You only have three hours from the time you feel a stroke coming on to get a shot of tPA into your system to break up the blood clots that are causing the stoke. So don't play with your life, get help." 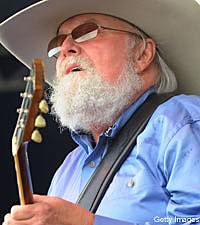 Charlie was left with a little bit of numbness in his left hand, but physical therapy helped him regain mobility and his fiddle and guitar playing are fine. He has no plans to slow down and one look at Charlie's tour itinerary shows it is going to be a busy year.

After more than 50 years in the music business and multiple accolades, including CMA, Grammy and Dove Awards, Charlie remains passionate about making music and entertaining audiences. When asked what advice he has for young artists hoping to emulate his success and longevity, he responds, "Learn to entertain. When your single loses the bullet at 53 and the record company is losing interest in you and radio isn't playing you anymore, learn to entertain people and be nice to people. You reap what you sow.