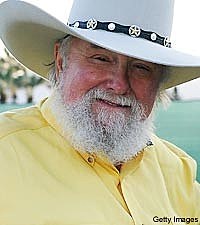 He may proudly sing patriotic songs, including 'This Ain't No Rag, It's a Flag' and 'My Beautiful America,' but now Charlie Daniels says he's angry and disappointed by leadership in his home country. Speaking out against the recent health-care reform bill, Charlie says America is on a fast downward spiral.

"We no longer have a representative government; we essentially have a dictatorship that is willing to force their will on us regardless of what we want," he says in a March 22 post on his website's "Soapbox and Message Board" titled 'Black Monday.' "This is the most despicable act ever perpetrated on the American public by the most dishonorable congress we've ever had."

But most of the blame, the musician continues, falls on the Commander-in-Chief. "[President] Obama claims this program will actually cut the budget, but anybody with a brain in their heads knows that it will not only not cut the budget, but will cost trillions of dollars that we just don't have, adding catastrophic amounts to the national debt."

He continues, "I have always had unfailing faith in the American ability to persevere, to bounce back and overcome almost anything, but people, this health care bill will change America into something that will resemble a police state."

He then closes the post by issuing a bleak preview of where he believes the country is heading. "America is on it's way to becoming the largest banana republic on earth," he warns. "Pray for our troops, and for our country."

The Grand Ole Opry member, who recently returned to stage after recovering from a mild stroke he suffered earlier this year, is already back on the road with his band. (He also hints that skydiving may be in his future!)