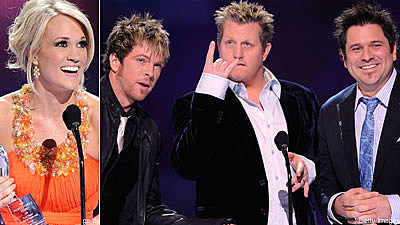 Last year's winner for Favorite Group, Rascal Flatts took the trophy again, claiming victory over rock acts Coldplay and Maroon 5. The trio also took the opportunity to announce a unique collaboration with People's Choice -- a contest for fans to create and vote on the cover art for their upcoming album, 'Unstoppable.'

"It only makes sense to have our fans design and decide the cover of our new CD since they are the ones who make it possible every day for us to make new music and tour," said lead singer Gary LeVox. "We've got a creative and loyal group of fans and are very excited to see the designs they come back with."

Submissions will be accepted until January 22 at the People's Choice website. On January 28, the band will narrow down the selections. They'll then present their top choices to the fans, who will ultimately decide which image will grace the album cover. The winning designer and image will be revealed in February.

'Unstoppable' will be released on April 7.

More than 12 million votes for the 35th annual People's Choice Awards were cast online by the public. The ceremony, aired live on CBS, also honored favorites in other genres of popular music, as well as in movies, TV, and online video.