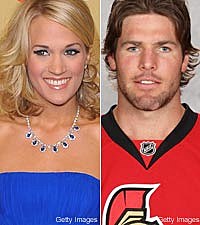 The rumors are confirmed! Carrie Underwood is indeed engaged to her boyfriend of over a year, NHL hockey star Mike Fisher.

"It's true," Mike told the Ottawa Citizen newspaper Monday morning. "We're both obviously excited and very happy and so, exciting times for sure."

Mike says he popped the question on Sunday but wouldn't give any further details. His teammate Chris Neil says the engagement was "a long time coming."

"There are going to be a lot of broken hearts here in Ottawa, all those girls who are in love with Mikey," he said. "But he's marrying an awesome girl. It's unbelievable for him."

We can guess there are a lot of broken hearts amongst the guys, too!

Carrie met her future husband backstage at a concert in March 2008. She kept mum on their relationship until the release of her new album, 'Play On,' in November. The CD's liner notes include a sweet shout-out to her beau: "Thank you #12," she writes, referring to Mike's jersey number. "You are the most amazing addition to my life! You are such a wonderful person and have had such an amazing hand in the building of this album and in the growth of me as a person. I love you so much! You make my life better in every way! I thank God for you every day."

A wedding date has not yet been set.