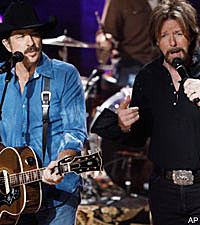 Since it'll be one of the last times they'll appear on TV as a duo, Brooks & Dunn want you to choose which song they'll perform on the ACM Awards telecast. Kix Brooks and Ronnie Dunn have already scored 26 ACM trophies and are nominated again this year for Top Vocal Duo. They'll also receive the Academy's Milestone Award in recognition of their 20-year career. The pair are going out in style, calling it quits as a duo after this year's Last Rodeo farewell tour.

The six songs for consideration on the ballot are: 'Brand New Man,' 'My Maria,' 'Red Dirt Road,' 'Neon Moon,' 'You're Gonna Miss Me' and 'Boot Scootin' Boogie.'

Also slated for CBS is 'Brooks & Dunn: The Last Rodeo.' The special, airing May 23, is scheduled to be filmed the day after the ACM Awards and will feature performances by Carrie Underwood, George Strait, Lady Antebellum, Jason Aldean, Taylor Swift, Rascal Flatts, Sugarland and many others.