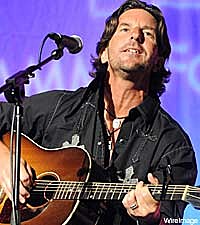 Happily following in his father's footsteps, Brett was in his sophomore year of medical school when he took a trip from his home in Oklahoma to Nashville to visit with a few record labels. He was unaware, however, of just how much that trip would change his life.

"Two of them kind of patted me on the head and sent me packing," he tells News OK, "but the third one was with Arista Records, and at the time, they were the best record label around."

Deciding he'd rather be an artist than a doctor, Brett left his studies and moved to Nashville, planning on being a huge star. But things didn't go according to plan. "My singles never really worked out at radio," he says. "Everybody thought I was gonna be a big shot, and then seven years later, I lost my record deal, lost my publishing deal. And I decided I'd better go back to med school and figure out how to feed my kids."

Disappointed, Brett signed with a smaller music publisher and returned to his hometown, moving in with his parents to finish school, while his wife and children stayed behind to sell their house. But only days after leaving Music City, his luck began to change when Faith Hill decided to record his song, 'Love Is a Sweet Thing' for her multi-platinum album, 'Breathe.' And that was just the beginning.

"I got 33 cuts in Nashville in the next nine months while I was going to school every day," he recalls. "Which was just crazy. I'd had two cuts up to that point in my career .... It was like every day my publisher was calling saying, 'Hey, Martina McBride cut this, and Tim McGraw cut that.'"

The irony of the timing isn't lost on him. "Just when I had kind of given up the dream of ever making it in the music business at all, it kind of all just fell in my lap."

Brett soon dropped out of medical school for the second time, returning to Nashville to once again pursue his passion. Although he's a lot of success over the years, Brett is perhaps best known for co-writing the Grammy-winning 'Jesus Take the Wheel.'

"We wrote it before Carrie [Underwood] was even on American Idol," he says. "That's just one of those magic things where the song kind of finds its way to just the right artist at just the right time."

Looks like the magic is continuing. In country music, he's had cuts by Rodney Atkins, Kenny Chesney, Jason Aldean and Rascal Flatts, plus many others. He also lists Bon Jovi, Daughtry, Nickelback and Leona Lewis among his credits. In addition to writing, Brett has also worked as a producer with Taylor Swift, Jessica Simpson and Josh Gracin.