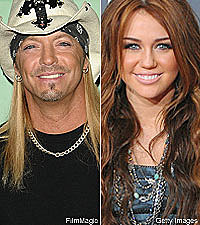 Bret Michaels is getting a little love on country radio ... along with a little resistance.

The Poison frontman and reality TV star has recorded a country-rock single, with help from a country girl at heart, Miley Cyrus. 'Nothing to Lose' is the name of the new song that pairs the heavy metal icon with the pop princess.

"Bret and I had a great time in the studio together just hanging out and making music," Miley reports. "He's so passionate about music, and it shows. It's such a rad collaboration, because it shows that two artists that seem so different on the outside can come together and organically create something that we are both proud of."

The 46-year-old Bret has received a bit of backlash for choosing 17-year-old Miley to sing harmony on the song, which includes sexually suggestive lyrics. "I never sat down and said, 'Look at the content. Look at the lyrical content ... There is nothing I have to be defensive about," he tells US magazine. "There is no reference to her and I. It's not even a duet! I just thought it was a beautiful song."

Bret explains that he wrote the song several years ago but just recently played it for Miley when the two were in the studio recording her cover of Poison's classic hit, 'Every Rose Has Its Thorn.' "[Miley was] like, 'This is an incredible song, it's beautiful. Maybe I could [add] some stuff to it, some harmonies,'" Bret recalls. "She was excited that she didn't have to follow any rules."

As for crossing over to country, Bret doesn't have to be as defensive. He's earned country cred by writing with several of Nashville's top tunesmiths throughout the years. In 2005, he released a country-leaning rock album, 'Freedom of Sound,' and was a judge on the country music reality-competition show, 'Nashville Star.'

Bret has recorded five versions of 'Nothing to Lose' -- three featuring Miley (one rock-leaning, one country-leaning and one acoustic) plus two solo versions. Listen to Bret and Miley's country version below.